Pete Muller - More Than This 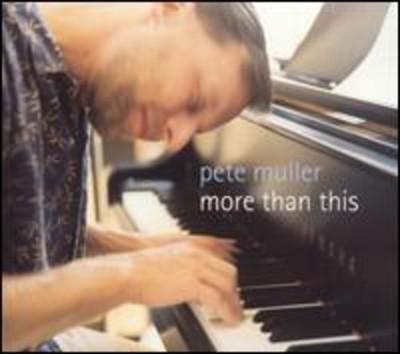 It's easy to turn on the radio and find a good song, maybe an artist that knows how to capture an audience's attention, but the best music is the kind that comes straight from the heart, from a desire to play and a passion for music itself. Pete Muller is one of those inspired musicians that can say, without a shadow of a doubt, that music is a passion, not simply a job. A talented pianist and vocalist sharing his love for music and his exceptional arrangements with audiences for the past several years from subway stations to coffee shops, well-known venues to gatherings at his home in New York City, Muller has had plenty of time to find his place in the music world, and released his debut CD, Just One Lifetime, in 2001. Now the successful singer/keyboardist is ready to release a new album, More Than This, and joined by a powerhouse of talented musicians and friends, will offer his music to a worldwide audience with open arms and open ears. Still Looking for My Home opens the album, setting a tone for the record, cool, but not subdued, featuring a host of beautiful piano figures laid under vocals reminiscent of Cat Stevens and a laid-back drum beat and light strings. I Don't Know What to Do, livens up the mood of More Than This, kicking the tempo up with a bright feel and a playful approach. Like a number of tracks on the album, I Don't Know shows Muller's greatest strengths in writing and singing, while his more melancholy pieces boast his talents for piano lines. A standard throughout the album, however, is Muller's emphasis on improvisation. 'Improvisation is a very important part of my music,' Muller says. 'I never play a song the same way twice.' Pete Muller woke up more than 6 years ago and realized that he could no longer find happiness in the corporate world. While he felt accomplished and satisfied, he couldn't find a new challenge, a goal to aspire to, and turned his attention wholly to his music. Originally playing smaller venues, like coffee houses and New York clubs, Muller now spends much of his time traveling to various places around the world, composing and playing for new audiences, with all of his proceeds going to charity. With More Than This, Muller has expanded every aspect of his music, recording with drummer Ben Hoyumpa and bassist Skip Ward and working with renowned producer Ted Cruz and Grammy-winning mix engineer Danny Kopelson. Now, with his musical horizons growing, Muller is free to focus on what really makes him happy, and the feeling has had residual effects, rubbing off on almost everyone he plays for. With songs like the cool 'Til It's Time to Leave and the jazz-influenced In This World, More Than This is a great blend of songs, while the hypnotic subtlety of Ann Marie Milazzo's backing vocals and guest appearance of violinist and groovelily founder Val Vigoda on Underneath the Ground and the cover of the Talking Heads' Naïve Melody perfectly compliment Muller's skills at the keyboard. The mysterious undertones of Almost merge perfectly with a flip at the chorus to an up-tempo backbeat, and The Ghost or the Fear serves as a memorable counterexample to his more carefree songs. The album even contains a few hidden tracks that give more to listeners than the standard musical experience. For a first-time listener of Pete Muller's music, a fan of all genres, or just a music lover looking to find a great new album for the top of their collection, More Than This is the right album for anyone.

Here's what you say about
Pete Muller - More Than This.