Stephanie Teel - More Than a Dream 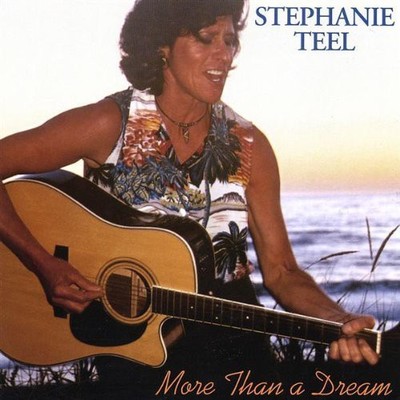 ABOUT THE CD ' More Than a Dream' is my first CD. I am an avid sailor and surfer. In 1992, I sailed to Mexico and cruised there for a year before returning to San Francisco. During that time I hooked up with a mandolin player, Steve Gale who was also sailing. Together we played yacht clubs and funky bars in Cabo San Lucas, Puerto Vallerta and La Paz. In Puerto Escondido, we did a gig with Jeff Cook, guitarist in the country/western band Alabama. One night, while anchored in the calm waters of Matanchan Bay, I wrote 'More Than a Dream.' The dolphins swimming around our boat and leaving their phosphorescent glow through the water inspired me. I also wrote 'Matanchan Bay Yacht Club Song,' about the other sailors we met. That song is not on the CD. But, if requested, I will sing it at my gigs. ' Desolation Cove' came about when my friend 'Sparky' asked Dana Messing (Cruise Tones) and me to play some surf tunes for a local TV spot. So I quickly wrote a fun song about a female surfer riding at a hidden surf spot. That one has become a favorite with all my young surfer friends. I wrote 'Arizona Bound' after driving to Sedona with a long time friend, Thea Vierling. Together with her brother and some students we set out for the Hopi Indian reservation and participated in building a structure for the Indians to store thier tribal costumes. I called my long time friend, guitarist/recording engineer, Garth Webber from Red Rooster Studio. He in turn introduced me to, Keyboardist/producer Tony Lufrano. Tony brought in drummer, Trey Sabatelli and bassist, Robin Sylvester (Rat Dog). With a solid rhythm section we added Dave Stone (Huey Lewis) on sax,. John Sepala laid down a piano part on 'Love Me Still,' Megan Lynch plays fiddle on 'Fragile', Dana Messing played a keyboard part on 'Desolation Cove', and Garth added a slide guitar part on 'Teaser' with Stephanie playing all the other electric and acoustic guitar parts. Stephanie also plays a flute part on 'Arizona Bound'. 'Music and the ocean are my spiritual fulfillment!' S.T. Stephanie Teel Bio Stephanie Teel is a native San Franciscan, and still lives in the City, across from Ocean Beach. She started her music career playing all the top Hotels in San Francisco for private parties, including political events and entertaining overseas dignitaries. Her road gigs began in Las Vegas with the Al Bellow Revue with Jenny Jones as the bands leader and drummer. Jenny went on to be a TV talk show host. The band was booked solid for two years playing in several casinos in Vegas, Reno, Tahoe, and clubs in New Mexico and a tour of eastern Canada. Stephanie also has played solo performances in Great Falls, Montana, New Orleans, San Francisco, Oakland's Art & Soul Festival and a tour in Arizona. Stephanie retuned to San Francisco and in the 1980's, and put together the 'Stephanie Teel Band'. She played the dance club circuit, five nights a week throughout the Bay Area. Top quality musicians were always part of her band. With her father, Mark Teel, a renowned S.F. sax player, Stephanie played in his big band for the Oakland Raiders for two football seasons. In 1990, Stephanie was the lead guitarist for the Zasu Pitts Memorial Orchestra. The band featured some of the best musicians and vocalists in the Bay Area. She also played for Linda Tillery at the 1990 Michigan Women's Festival and in 2002, toured northern Italy with "Gwen Avery and the Blues Sistahs". Currently Stephanie plays with 'The Fabulous Cruise Tones. The band is booked through out the year for private parties, country clubs, yacht clubs, festivals, fundraisers, and local hotels.

Here's what you say about
Stephanie Teel - More Than a Dream.