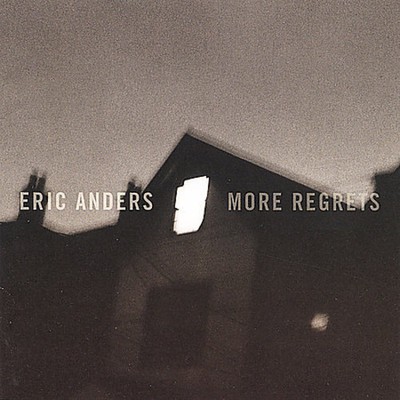 'More Regrets' is the second full-length release by LA-based singer-songwriter Eric Anders. For these eleven songs, he teamed up with producer/guitarist Randy Ray Mitchell. The style is similar to his debut release, 'Not At One,' but there is also something very new and unique to the sound of this CD. Praise for More Regrets: MARK WILSON, The Evansville Courier, February 3, 2005: The Los Angeles-based singer's second album is A MASTERPIECE OF DARK, AMBIENT TEXTURES, layered soundscapes and subtly hypnotic grooves, with his smooth tenor voice generally up front in the mix. It's a refreshing break from the sonic bombast and Electronic Beats 101 music of most of what currently passes for rock and pop.... He detoured long enough to release an EP of politically oriented songs last year, but on 'More Regrets,' he picks up where he left off, exploring personal themes of relationships. However, this time Anders expands on his debut by expanding his lyrics to explore themes of home and underscores them with more experimental music. The results are at once devastating and hopeful. With 'More Regrets,' Anders achieves what songwriter Ryan Adams has yet to do - an entire album that sounds good and has lyrics to match. Highlights include the insistently grooving title track, the hypnotic 'Together Alone,' the plaintive and desperately hopeful 'Settlin' Comes' and the cynical, gently rocking 'Song 79.' PHIL JACKSON, Zeitgeist: 'I was greatly impressed by Eric's 2003 CD 'Not At One' and had a feeling I wouldn't be disappointed with his next one. Well, I was right! The edgy songs, mostly written by Anders with Mark O'Bitz and guitarist Randy Mitchell have a strangely melancholic yet exuberating quality and a unique gravitas. Eric sounds every bit as anguished as Nick Drake on 'Icarus' and his sweet voice is an ideal partner for the beautiful ballad 'Settlin' Comes'. Mitchell produces the album and seldom ventures into a guitar break except on the glorious end to 'Practised Isolation', a song about bittersweet relationships, a recurring theme on the album. This economy of guitar style empathises perfectly with the mood created. 'You Lied' is one of the more instantly accessible songs and includes a writing credit for Eric's sister, Diana, and is also one of two songs featuring the graceful cello of Adrienne Woods. 'More Regrets' is an album to listen to repeatedly- introspective and intelligent atmospheric music which will, in part, intrigue and hypnotise you.' MICHAEL POPKE, Sea of Tranquility: 'Although this low-key and subtle Los Angeles-based singer/songwriter has garnered comparisons to Pete Yorn, Nick Drake, David Gray and R.E.M., I listen to More Regrets simply because I like it's haunting, poetic honesty. Leadoff track 'Song 79' - a song about writing a song - has me reaching for 'repeat' every time I hear it, and the title track should give you chills. The bleak, sepia-toned artwork featuring the outline of a home or a barn at dusk with a lone light on inside sets the musical scene perfectly.' ROBERT KINSLER, OC Register 'Orange Pop' review, February 18, 2005: 'There is a seriousness of tone and musical depth across the latest full-length disc from Newport Beach-based Eric Anders that will please fans of artists such as Nick Drake and Jeff Buckley. More Regrets builds on the promise of his 2003 debut Not at One and 2004 EP Songs for Wayward Days, which shouldn't come as a surprise to those who have heard those excellent discs. On More Regrets, songs such as 'Together Alone' and 'Icarus' explore isolation, loss and love with an uncanny truth that casts a powerful spell that transports listeners into the songs themselves.' DAN KIMPEL, Music Connection Magazine, March 23, 2005, 'Rich with pensive songcraft, More Regrets is the latest full-length release from Los Angeles-based singer-songwriter Eric Anders. As this DIY project shows, Anders is a poetic troubadour.' SunHerald.com, Mar. 03, 2005 'Eric Anders is a singer-songwriter based in Los Angeles; this Feb. 22 release is his second. It is a complex presentation, but there are obvious pleasures: carefully crafted lyrics, catchy melodies and hooks that draw listeners into deep, sometimes depressing themes. Eric's wistful vocals, together with Randy Mitchell's guitar/programming/production skills, create a trancelike atmosphere. Able assistance by Zac Rae (keyboards), Butch (drums), Jorgen Carlsson (bass), Adrienne Woods (cello on two songs), and David Jackson (upright bass on two) adds a 'band feeling' to this studio effort. The songs, written with collaborators including Mitchell, convey a sense of longing, dissatisfaction and yes, regret. The need for 'home' we all feel is frequently referenced in the compositions, the best of which ('You Lied,' 'Together Alone,' 'Song 79,' and 'Icarus') reminds me of R.E.M.'s classic 'Automatic for The People.' Eric Anders has both familiarity and originality on his side. You'll like this one unless you require harder-edged stuff, particularly if you enjoy Nick Drake, David Gray, David Steele or the aforementioned R.E.M. ' CHIP MIDNIGHT, ATOMIC NED, Donewaiting.com, February 18, 2005: 'Eric Anders is one of 523,814 dudes out there with a guitar who write and record songs that will never be heard by more than a handful of people. The difference between Anders and about 522,814 of those dudes is that his stuff is actually really good. No real comparisons that I can come up with offhand - he's not a folk artist, he's not a suicidal fella, he doesn't write nonsensical lyrics, he's just a middle-of-the-road singer with a nice voice and mild mannered music.' GREG HOWELL, Rockenworld: 'In just his second full length album, Eric Anders is already being touted as one of the best singer/songwriters of today. Upon hearing More Regrets, you realize that this praise is definitely warranted.'

Here's what you say about
Eric Anders - More Regrets.