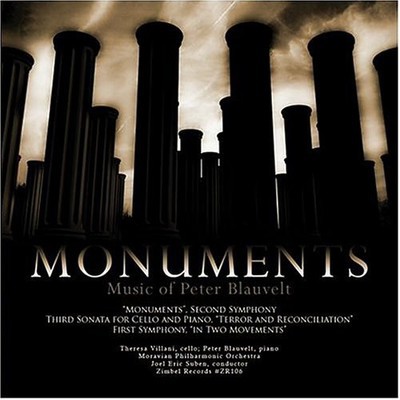 'Monuments', Second Symphony (1996-997/99-00) for orchestra Originally, this piece was written for wind octet and titled 'Monuments,' due to the monumental character of the three movements. After listening to the octet's premiere at the University of Miami in 1999, it seemed that, as satisfying as the listening experience of the octet was, there was a lot more power and sophistication in the piece that could only be brought out by an orchestra. Within a short time, the symphonic version was put to paper, which explains the two sets of dates after the symphony's title. The Central and Eastern European character of the piece, especially the second movement's opening rhythms, remained untouched by the new version. ====== Third Sonata for Cello and Piano, 'Terror and Reconciliation' (1993) As with the Second Symphony, this piece was originally for a different instrumentation. Conceived as a monumental piece for bassoon and piano, it quickly caught on in it's cello version and has received several performances that way. The subtitle 'Terror and Reconciliation' came about as the piece, after it's US premiere in 1993, was first performed in France at one of the concerts for the 50 anniversary of the British bombing of the port city of Le Havre in 1994. Despite that connection, the stylistic elements of the piece are very similar to those of the Second Symphony, especially the first movement's opening rhythms. ====== First Symphony, 'in Two Movements' (1979-80) for orchestra This piece was conceived as a doctoral dissertation. Yet it shuns many of the usual academic elements associated with such a project. Although structure-wise and orchestration-wise it is mostly atypical of a symphony, it nevertheless has quite a few of the standard symphonic elements and a monumental feel to it - although it's quiet sections are longer and more quiet than usual, and the resulting outbursts of energy at times reach the frenetic. Despite having been written much earlier than the other two pieces preceding it on this CD, the stylistic connections between the compositions are many. This earlier style is really only a somewhat wilder version of the same, but more mature style heard in 'Monuments' and the cello sonata. ====== Peter Blauvelt (b. 1956) was born in France and grew up in Germany, where he began his studies in composition and piano. In 1975, he came to the U.S., where he studied at Harvard University. There, he received three degrees -- including a doctorate in composition. Since 1968, he has often given recitals -- not only of his own pieces -- in the U.S., France and Germany, in public and on the radio, and has received several prizes for both composition and piano. Meanwhile, he has also been performed in other countries in Europe and North America. After leaving Boston for Florida in 1984, he co-founded the 'Tampa Bay Composers' Forum' in 1989 and founded 'Creative Arts and Tutoring Services' in 1990. To date, he has written over 125 compositions, mostly chamber music, and has had nearly 100 of them performed in public.