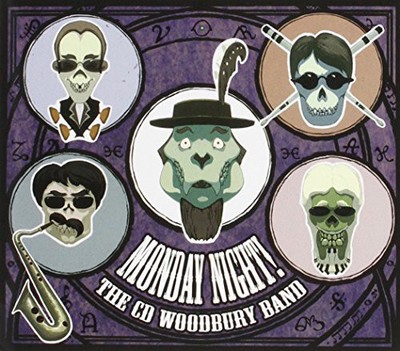 CD Woodbury Band - Monday Night! The great Northwest has produced great musicians from the Kingsmen to Jimi Hendrix. Now add the blues busting CD Woodbury Band to the list as the pride of Washington state. After years of paying his dues in a variety of genres, Woodbury founded his group in 2009 and released Sunbanks Live! (2010) while earning a rep as "the Northwest's best-kept secret." Their rump-kicking studio debut will lay that distinction to rest as they break out to wide acclaim. Singer, songwriter, and guitarist Woodbury; along with Chris Kliemann (keyboards), Mike Fish (bass), Don Montana (drums, lead vocals) and Mike Marinig (sax, lead vocals) power up the blues on ten original compositions. The bopping shuffle "These Blues Keep Me Right Here" opens dramatically with the sinewy electric guitar of Woodbury as he declares with stone blues expression "Yeah...she left me to weep and moan. When my head says go and get her, my heart sinks like a stone." "Mean Jenny" virtually re-invents the boogie with unusual, off-beat syncopation and a hooky, hypnotic chorus of "Down on the bayou" surrounding the chilling tale of a fearsome backwoods woman who could give "Poke Salad Annie" a run for her money. Nursing their "boogie woogie flu," the band crackles on "Been So Long," a spine-snapping ruckus sung yearningly by Marinig with Woodbury sublimating his passion by bending the frets of his Telecaster while the saxist honks lustily in sympathy. The dance ready title track presents hard funk that lesser bands only experience on vicariously as Fish and Montana lock in like the JBs of yore, "funkateer" Woodbury "skanks" on his rhythm guitar, Kliemann attempts to punch through the keys of his organ patch and Marinig channels Maceo Parker. A dynamic change to the autobiographical, lowdown slow blues "Pawn Shop" has Woodbury pining about pawning his prized instruments to put food on his table and pay rent, his heart-rending solo speaking wordless volumes about his pain as he pours out every ounce of his soul. Flaunting more versatility, "Pleasure's All Mine" is jazzy big beat R&B with clever, "inside joke" lyrics about being in a band composed by Marinig, and showcasing his hip delivery and hot horn. Montana beats the skins like Gene Krupa on the rapturously jumping, jiving, wailing "Ring-A-Ding" as Woodbury boasts "I got a little woman, she moves like jello on a spring, she's got my heart clangin', she's my little ring-a-ding" pumped by the rollicking 88s of Klieman and the leader's fleet-fingered, cool man jazz solo. "Burn the Bridge" salutes Motown funk with Montana soulfully lamenting a bad marriage via the scalding "Not a blessing but an evil curse, I took your hand for better or worse" intensified by bruising tenor and a flaming, string-torturing guitar solo. On the percolating funk of "Two Wheels" the beat is turned every which way but loose while Montana growls a hip biker story involving his generous gambling baby and the sly reference "And I'll take her out on the town cause The CD Woodbury Band is gonna burn the house down." Ending the set with a moody, late night "nourish" ambience, the evocative minor key "SauBall Blues" humorously refers to a sausage/meatball sandwich featuring Woodbury pleading "... just give me the soup of the day, and two or three cold, cold brews" as he and Marinig plumb the emotional depths with deep, searing solos. CD Woodbury has attained an enviable goal for guitarists: A personal, muscular, expressive style with no direct influence. Combined with his exceptional band of songwriters, singers and head-cutting instrumentalists, the result is booty-shaking contemporary blues with wit and extraordinary substance. Dave Rubin 2005 KBA winner in Journalism.

Here's what you say about
The CD Woodbury Band - Monday Night.