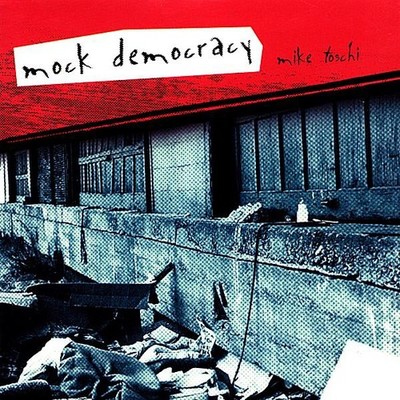 'Sweet cries of the boy! Such an angelic voice- emoish style of lyrics, real simple yet truthful...' Maruja Clensay, Music Director, KZSC, 88.1 FM Santa Cruz, CA. Biography Mock Democracy is the new album from Mike Toschi (Tos-key). The record reflects pensive lyrics in the tradition of earlier Neil Young, Ani DiFranco and Billy Bragg. Toschi draws on the youthful energy of punk rock and the hard realities of hip-hop, uniting them with the craft and finesse of a modern-day folk artist. Mock Democracy is the result of 25 years of musicianship and artistic experimentation. The album delivers a range of different moods and emotions that are inspired by Toschi's experiences teaching at an alternative high school, and working for nonprofits on issues of homelessness, affordable housing and renters' rights and as a laborer. Mock Democracy was recorded at Haywire Recording studio with Rob Bartleson (Wilco, 30.06, etc.) in Portland, Oregon. History Born in Seattle, Mike has bounced around between Portland, Seattle, San Diego and NYC since 1990. In 1995, he and two like-minded musicians formed the politically charged power trio The Help. The Help played three years' of shows and benefit concerts with musicians ranging from Pete Krebs to the Murder City Devils. Toschi formed the Global Seepej Record label and released The Help's well received debut album Justice, Impunity, Foodstuffs and so forth... In the time since the Help dissolved, Mike has been experimenting with other musicians (Bit Part, The Plains) while continuing to write songs and develop new material. He is also currently the leader of the indie/punk/rock band At the Spine.

Here's what you say about
Mike Toschi - Mock Democracy.