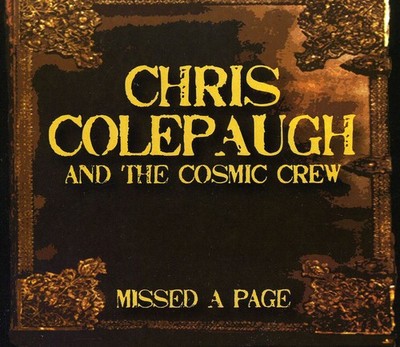 Chris Colepaugh makes southern dipped old-fashioned rock that bridges the gap between old school double neck guitar crunch and moaning alt-country pedal steel wail. He and The Cosmic Crew have performed at festivals throughout Canada and the United States and have toured extensively with over fifteen national ( CAN & US ) coast-to-coast tours where part of his US itineraries have included dates with Government Mule, North Mississippi Allstars and Grady. Awards and nominations are plenty and include the East Coast Music Awards, The International Acoustic Music Awards, The Toronto Music Magazine Awards, the Contact East Touring Excellence Awards and many others. Chris Colepaugh and his the album Missed A Page also won the 2010 MNB Awards for Best Musician and Best Rock Album. Chris Colepaugh's catalogue of music has also had it's share of accolades as well. His song "Caught Up To You" was featured on the international hit television show Degrassi : The Next Generation ( Episode 808 ). "Spotless Mind" from "In Your Backyard" was part of the film "Break The Cycle" from Ireland. Chris was also a semi finalist in the Starbucks Music Maker Series in Vermont and his song "Coffee Shop" was featured alongside of Moe., Bob Weir and Umphrey's McGee on the 2007 - 10,000 Lakes Festival CD. In addition, there are the numerous compilation CDs he has been featured on. However, it is not just his Cosmic Crew that brings music to Chris Colepaugh, it's also his friends. An observer with a keen eye would have spotted him playing drums for Star Académie winner Wilfred LeBouthillier, playing pedal steel across Canada, France, Belgium, Switzerland, and Germany with International Canadian sensation Roch Voisine, invited by Gordie Johnson on stage to perform pedal steel and guitar with Grady, and playing sessions for artists such as International Daniel Pearl Fiddler Samantha Robichaud, multi-country-award nominees Melanie Morgan and Darcy Mazerolle, francophone artists Annie Blanchard, Anique Granger, Trisha Foster, Jason Lang and many more. And with producing securely under his belt ( he spent two weeks in Texas at Willie Nelson's Studio mentoring producer methods with Gordie Johnson ) there is no stopping this guy! Chris is endorsed by Sennheiser Microphones, Gibson guitars ( full feature and interview on Gibson.com USA ) and Traynor Amplifiers, and has signed a deal with his management company and Fontana North Distribution.

Here's what you say about
Chris Colepaugh & the Cosmic Crew - Missed a Page.