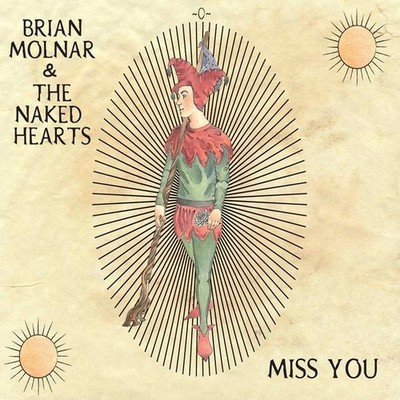 The fool's number is zero, which to the gambler represents the infinite possibility of all things. To the tarot reader it symbolizes initiation into something greater than himself. The fool wanders with his eyes to the sky, the sun at his back, and an imminent precipice before him. If one is lucky they may catch a glimpse of the fool in the moment, in his true element. Capturing an instant in the life of the fool is the cornerstone of 'Miss You', the new live album by Brian Molnar and The Naked Hearts. Recorded on tour in Murfreesboro, TN at The Walnut House as the band was wandering foolishly along the eastern seaboard while missing their homes and preying on possibility. Featuring tracks from the commercial releases "Temperance & the Devil'," "Feelin' Out of Time," and Brian's solo album "Brian Molnar"; "Miss You" follows the path that Brian Molnar & the Naked Hearts have been treading since the beginning. While planting the left foot in the past, the right one in the future, and raising their heads to the calm, suburban New Jersey sky, Brian Molnar & the Naked Hearts show what kind of band they really are. "Mixing tarot with horseshit and honey...there's something delightfully off-beat here that grabs hold and doesn't let go' (Mid West Record Recap). Brian Molnar and The Naked Hearts relentlessly draw a line in the sand and then hold it, despite all odds.This revealing live album shows the band standing on the shoulders of giants like Kris Kristofferson, Townes Van Zandt, Neil Diamond, The Rolling Stones, and Bob Dylan. The band skillfully holds their own in the collective unconscious of American music after having performed in some of the best bars, clubs, venues and festivals from New York to San Francisco. While managing to constantly balance on the edge between fools and kings, "Miss You" is a glimpse into the life of one of America's best kept secrets and most transcendental bands.

Here's what you say about
Brian Molnar & the Naked Hearts - Miss You.