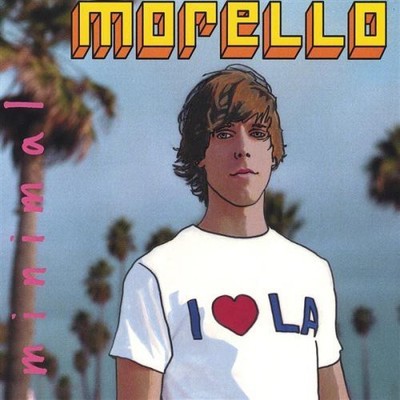 Pamla Des Barres on Morello's 'MINIMAL': 'Hey Dolls! Being born and bred here in sunny So Cal, I was tickled hot pink when Malcolm Cross asked me to chat about the Sunset Strip and my Hollywood heyday for 'Los Angles,' the first track on Morello's MINIMAL, Malcolm's divine homage to my home town. Perhaps it takes a consummate Englishman to relish the laid backwards, pscho-delic, mighty musical trippiness and sunshine madness that is the City of Angels. And he's an amazing drummer, singer, songwriter, exquisite harmoniser, piano player, and all-around good-viber, a perfect match for the blue, blue skies of Santa Monica, the city-by-the-Pacific that Malcolm now calls home. Listening to 'It's All Good,' or 'I Had to Know,' I find myself slip-sliding back to the crazy, lazy L.A. days when the best music ever made poured from hundreds of wide-open Laurel Canyon windows, heralding the rock renaissance with brazen aplomb. 'The record is called MINIMAL partly because it was made with minimal resourses and no budget, and most of it was recorded on a very small portable recorder,' says Malcolm. Just like the good old days. Malcolm now plays drums with one of my favorite-ever bands, Minibar, so the title is also a bit of a tip of the hat. 'Yes,' he admits, 'I wanted to wear that badge proudly on my sleeve.' It's not just the sixties Summer-of-Love that Malcolm has captured so intimately. 'Summer Haze,' conjures up Chet Baker's moody, unpredictable West Coast of the 50's, and 'Say you're on My Side' evokes the funk majesty of Earth, Wind and Fire, a band Malcolm grew up listening to. Strangely enough, Mal's into to the California sound came via Prince. 'Through him I got turned onto Todd Rundgren and Joni Mitchell, people who had influenced him, and were also autonomous artists - leaping around philosphically and stylistically. I wanted to make the kind of record you could listen to in one go, a recod that really takes you on a little adventure and let's you in on private jokes.' As a teenager, Malcolm devoured skateboard magazines, gazing at the 'pictures of endless blue skies.' His first trip to California was playing drums with Spiritualized, opening for Radiohead - 'a pretty mind-blowing way to see America.' Malcolm is now right at home under the sunny So Cal skies. 'There is such a weight of great music made in LA,' he explains, 'I wanted to create a homage to those people I love. When I'm feeling down or gloomy, I listen to the Beach Boys or something that's unashamedly straightforward and celebratory; the same music that made you dance around your living room as a kid.' Music just like this. This record sends me. MINIMAL is an infectious romp through California's magnificent musical memoirs, still managing to sound wildly Right Now. 'The way it was made is a celebration, and recording is such a gas. I laugh hysterically when things are going well. There's a line at the end of the record - 'if this once made you smile it was all worth my while.' It seemed like the perfect tag line. I made this to amuse myself and I'm putting it out in the hope that it might amuse and entertain other people.' Trust me, dolls! Pamela Des Barres P.S. Other celebrity fans include Pete Yorn, ('I LOVE this record - there's like a hit song in every genre') Ron Sexsmith and the Wallflowers...MINIMAL also received a coveted spot on world-class LA college station KCRW's playlist earlier this year and made it to the Top 40 of that stations 'most played' chart...South Bay paper 'RAVE!' described MINIMAL as 'one of this years top 10 records you've never heard'...

Here's what you say about
Morello - Minimal.