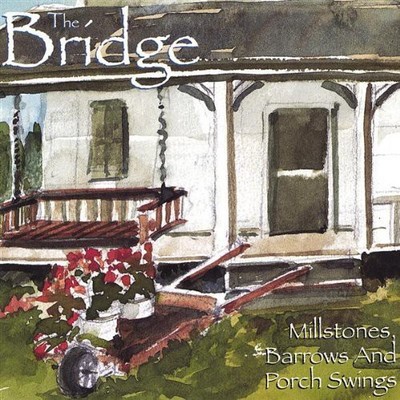 'The music is reminiscent of a time when music was harmonies and sweet guitar work-perhaps Simon and Garfunkle or James Taylor, but make no mistake - the sound is their own...'Aaron Fox - WFDU FM 'Pure, simple, compelling. This band from Manhattan will warm your soul and make you think.' Master Musicians Festival - Somerset, KY Meeting in 1993 Jerry Baldassaro and Charley Frehley formed the internationally acclaimed duo known as the Bridge. The Bridge was a regular part of the famous Fast Folk Cafe scene from 1994 until it's closing in 2000. Their music is currently being played in over 80 countries worldwide. The Bridge Band is the Bridge's cross over into country music and is still centered about music of songwriters Jerry Baldassaro and Charley Frehley, now joined by bassist/lead guitarist, Pete Mastro. The individually unique finger styles of Jerry and Charley have woven themselves into a totally new country sound brought back to earth by bass runs expertly played by Pete. Charley Frehley - songwriter, guitar, bass, keyboards, lead vocals and harmony vocals - Bronx, New York - born to a family in which music was part of everyday life. His dad was an accomplished pianist and his mom played piano for the church choir. You may all know his brother Paul Frehley - better known as 'ACE Frehley' of KISS fame with whom Charley began his musical career in a rock group called 'Micro-Organism'. Charley hung up his rock guitar to go on to study classical music as well as to sing lead solo in the choir. Jerry Baldassaro -songwriter, six and twelve string guitar, bass, lead vocals, harmony vocals and melodica - Bayside, New York -set out to be a stage actor - little knowing it was his music he would be performing for audiences in the US and Canada with his music being heard as far away as Australia. As a child Jerry performed as a soloist in church choirs and won various state competitions, which got him an audition with the famed Vienna Boys Choir. Fearing he would lose his family as well as his family jewels, Jerry, fortunately, did not make the cut. Guitar has always been a part of Jerry's life studying formally as well as spending countless hours at the old Greenwich Village clubs watching the masters of folk and emulating their techniques. Pete Mastro - Bass guitar, lead guitar, banjo and mandolin - Valley Stream, Long Island. Pete is an accomplished session player who has performed with countless numbers of New York area bands. He was bassist for the very eccentric New York artist, Phoebe Leggere, for the past few years and joined The Bridge Band in the summer of 2001. Pete is comfortable with all styles of music and rounds out The Bridge Band sound with incredible bass runs and amazing chops on the lead guitar.

Here's what you say about
The Bridge Band - Millstones Barrows & Porch Swings.