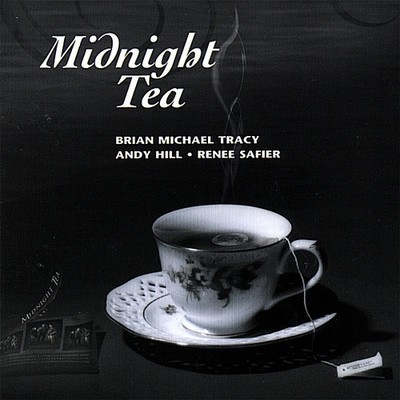 Experience the time-honored tradition of storytelling with poet Brian Michael Tracy and folk/rock singer-songwriters Andy Hill and Renee Safier on their spoken word and music CD effort, Midnight Tea. The Midnight Tea CD features Brian reading his poetry interwoven thematically with songs performed by Andy and Renee. The selections are also from his companion poetry book, Driving With Dante. Brian had been working on a book of poetry when he attended a Lucinda Williams concert where, between songs, her father Miller Williams read his poetry. Brian thought that Andy and Renee might be the perfect choice to do something similar. The folk/rock duo had carved a niche for themselves in Los Angeles as one of the few acts playing over 200 local and out-of-town dates per year either as a duo, with their band Hard Rain, at their annual Bob Dylan Birthday Party (now in it's 17th year), or recreating The Band's legendary Last Waltz concert. Andy and Renee paired their folk/rock music sensibilities and vast catalogue of favorite tunes and originals with Brian's poetry. "We began to place songs within the context of the poems to weave themes in and around each piece to create a kind of conversation," states Brian. This unique performance concept resulted in an Evening of Music & Poetry held monthly since January 2007 at Harmony Yoga in Manhattan Beach, California. As Brian's poetry collection Driving With Dante was being readied for publication, and the presentations at Harmony Yoga grew in popularity, the three artists decided to go into the studio to put the performance on record. They enlisted the services of Marty Rifkin, who produced and engineered the recording and also played several instruments. Rifkin is best known for his work playing pedal steel with Bruce Springsteen on The Seeger Sessions Band Tour as well as on the Devils & Dust and The Ghost of Tom Joad CDs. Midnight Tea and Driving With Dante both pay homage to Brian, Andy and Renee's artistic influences, such as the Grateful Dead's Jerry Garcia (poem: "Jerome," song: "Ripple") and poets Wallace Stevens and Larry Levis. Brian's flair for words, rhythm and meter, both written and verbal, immediately set the tone for the CD and companion book. Driving With Dante takes the reader and listener through a series of "water poems" reflective of childhood innocence, adolescent awakening into the experiences of adulthood, ranging from the depths of arson, murder and war to the elevated heights of music, science, poetry and love. The journey comes full circle with it's opening water theme in it's ending piece, taking the reader on a ride with Dante to Dante's View in Death Valley where "...the rivers disappear, turning slowly to dust..." A yoga practitioner, Harvard graduate, father and husband, Brian had stopped writing poetry when he left college and "became occupied with learning about business." Several years ago Brian's wife introduced him to yoga and through the practice and meditation he rediscovered poetry. His poems have since been featured in several issues of Yogi Times magazine under the banner of Savasana, a Sanskrit word meaning "final rest," and the pose often used to begin and end a yoga session. Yogi Times' managing editor Martin Hughes described Brian's poetry as: "...sobering and uplifting, complex yet approachable, soothing yet provocative." Andy Hill is a student of the folk and rock classics and has won several songwriting awards, including for "Two Trains," one of the featured songs on Midnight Tea. In 2005 Renee Safier's blues and jazz vocal chops won the Telluride Blues Festival's Acoustic Blues Competition.

Here's what you say about
Andy Hill - Midnight Tea.