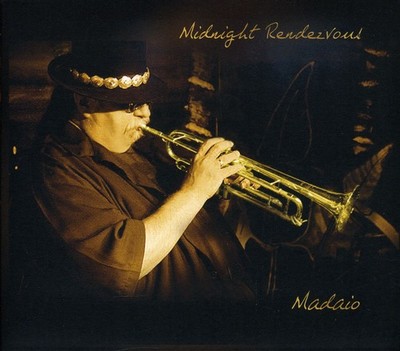 Steve has lived the life most musicians dream of. Along with David Sandborn,he performed on stage at Woodstock with the Butterfield Blues Band.He toured and recorded with the legendary Janis Joplin, and enjoyed two world tours with the Rolling Stones. Additionally, Steve has toured and recorded with Stevie Wonder,John Lennon,Bob Dylan, Bonnie Raitt, Madonna and Barbra Streisand to name but a few. As one of the most sought after recording session side men Steve has contributed to hundreds of artists albums. There are musicians. Then, there are musicians' musicians. Steve Madaio is a musicians' musician. He's the type of musician other musicians want backing them up. They know how much better he makes them sound. "If you're secure with yourself, they grab onto your energy," Steve notes. And grab onto his energy they have. John Lennon, Bob Dylan, Bonnie Raitt, Madonna and Barbra Streisand. A master of the trumpet and flugel horn, the Coachella Valley's Steve Madaio is one of the most sought-after studio musicians in the business. Steve is a native New Yorker who grew up surrounded with the sights, sounds and music of the Big Apple. By the age of 15, he was performing in the Latin Quarter. Other gigs included Broadway and a rock 'n' roll show.In 1974, Steve followed his muse to California. He did a lot of session work and soon found himself in demand as backup for many artists. Steve is acutely aware of his role as an artist and takes his responsibilities to his public seriously. "They believe in what you say, so you have a responsibility to be careful about what is said and be true to your word," Steve says.Steve believes the arts are important to society and he approaches what he does with an almost religious fervor. "I can share that with people, and maybe, just maybe, I can change someone's life." And he does share his art with people. His music is a glimpse into this man's soul. He invites all to come along. "Enjoy the music. Enjoy the moment" A master of the trumpet and flugel horn, Steve is one of the most sought-after studio musicians in the business.

Here's what you say about
Steve Madaio - Midnight Rendevous.