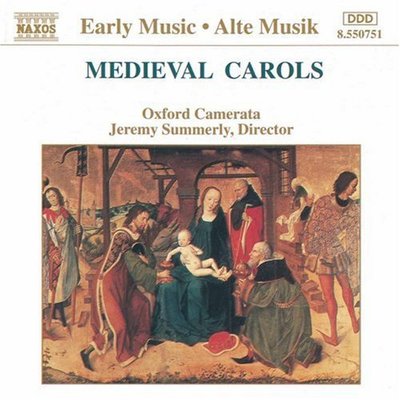 In 15th-century England a tradition grew up for the composition of polyphonic carols. None of them is ascribed to a specific composer or poet, neither is their function completely understood. The form is that of alternating verses and burdens (refrains), the language generally being a mixture of Latin and English. The majority of the carols have sacred texts and it is possible that these were designed for liturgical use. Others are moralistic or celebratory and were possibly used to enliven feasts and banquets in aristocratic households or for recreational purposes at educational establishments. The most common type of carol is that relating to Christmas. The examples offered here are 'What tidings bringest thou?', 'Now may we singen', and 'Nowell sing we'. Not so overtly joyful but equally optimistic is 'Alma redemptoris mater' whose verses poetically paint the scenes of the Annunciation, Nativity, Crucifixion, and Resurrection respectively. After the Christmas carol the next in order of popularity was the Marian carol as represented here by 'Ave Maria', 'There is no rose', and 'Hail Mary full of grace'. In these settings the melodies are fluid and the harmonies subtle in order to portray the Virgin Mary as tender and graceful. Additionally the lives of the saints were frequently the subject of carols, none more robust than 'Eya mater Stephane' in honor of the martyrdom of St Stephen. By contrast the carol 'Be merry be merry' rejects specific subject matter altogether in favor of allusions to the many glories of Christian life as a means to universal happiness. Most memorable of all is 'Deo gracias Anglia' which recounts the defeat of the French by the English at the battle of Agincourt. King Henry sails to Normandy, takes the town of Harfleur by siege, wins the day at Agincourt, and drags the surviving French noblemen back to London; all this, of course, in the name of Almighty God. In a more popular style are the two Christmas carols 'Riu riuchiu' and 'Gaudete Christus est natus'. Spanish and English respectively they are catchy traditional medieval melodies whose refrains were harmonized in the early Renaissance. Also included here are three monophonic songs. The simplest, 'Planctus Guillelmus', is an anonymous strophic lament written upon the death of William the Conqueror. The form of Peter Abelard's 'Planctus David' is more elaborate, divided as it is into six sections, each containing metrical and musical repeats. Abelard's poem is a reworking of David's lament upon the deaths of Saul and Jonathan from the Second Book of Samuel. More rhapsodic still is Hildegard of Bingen's 'Oviridissima virga' which portrays the Virgin Mary as the root of beauty and fertility. This beautifully-paced meditation is one of the few surviving examples of the musical work of this remarkable medieval female mystic.

Here's what you say about
Jeremy Summerly - Medieval Carols.