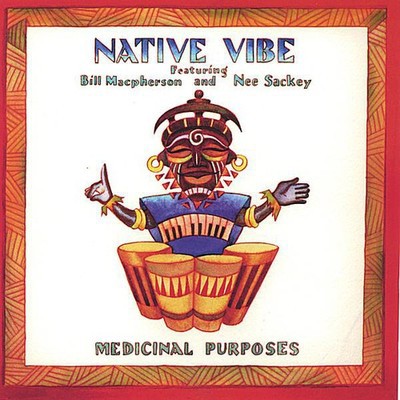 Native Vibe can best be described as a high energy, eclectic instrumental music group that blends Latin, African, Caribbean, Funk, Rock and Jazz styles. This unique band features soulful guitar melodies, intricate keyboard textures and is always percussion and drum driven. The Native Vibe crew will take you to exciting heights of intense jamming, then finesse you back down with seductive melodies and mood enhancing interludes. In the course of one concert you may hear the influences of salsa, cha cha cha, soukous, highlife, reggae, contemporary jazz and rock. The concept for this band originated in 1987 in San Diego, Ca by band leader Bill MacPherson. Bill was doing a Master's program at SDSU after graduating from the esteemed Berklee College of Music. He had been raised in the Congo by medical missionary parents and had been blessed to hear many African music styles there. As he began to form and compose for this band it was a natural extension to incorporate many world music influences. Personnel-wise Native Vibe has drawn from top musicians from the USA, France, Brazil, Venezuela, England, Mexico, Ghana, Benin, South Africa, Denmark and Camaroon. These musicians have contributed on both the recordings and live shows and the band has always sought to democratically reflect their individual talents. Bill recorded three solo CDs before arriving at the name Native Vibe with his then and long standing music partner Nee Sackey from Ghana, West Africa. They then released three more CDs, Medicinal Purposes, Spirits and Mirage as Native Vibe. All three CDs received critical acclaim and national airplay. The current CD being recorded now is all Latin with salsa, meningue, cha cha cha and latin rock flavors. This project is inspired by Bill's many adventures in Costa Rica as a surfer and musician and is titled Luna de Nosara in honor of the village he stays in. Native Vibe is comfortable on a big festival stage or equally in a club or corporate setting. They typically perform as a six piece group configured as guitar, bass, drums, keyboard and two percussionists.

Here's what you say about
Native Vibe - Medicinal Purposes.