Gypsy Soul - World Is My Country 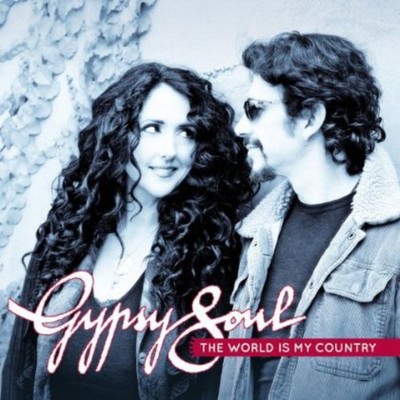 'Their music stirs the soul and moves the spirit.' Monica Rizzo, PEOPLE MAGAZINE 'Four Stars' ALL MUSIC GUIDE '...one of the most brilliantly instrumented and vocally adept bands alive... totally unique and captivating.' OC WEEKLY '...a beautiful impassioned new album, 'The World Is My Country'. Paul Freeman, MERCURY NEWS GYPSY SOUL   "Let's go out on a limb/Throw caution to the wind/Shed some skin," from "I'm Calling In."   Cilette Swann and Roman Morykit first met in Edinburgh, Scotland, some 22 years ago, "and it was musical lust at first sight," she recalls. Vancouver, BC native Cilette, of Irish and South African descent, had been in Paris, singing in French jazz bands, while British-born Roman, with roots in the Ukraine and Italy, arrived from London, where his rock band, Raising Cane had just been dropped by a major label. After a few months of writing and recording, the pair's professional relationship became romantic and soon the two were married and Gypsy Soul was born. Ten albums and half a million miles later, the two have forged a musical career that has taken them all over the world, building up a loyal audience that has enabled them to sell 1.5 million downloads internationally and 120,000 CDs in the U.S. alone.  They've had their songs licensed in numerous TV shows including: Providence, Roswell, Felicity and others, airing globally. Their music has also been featured in the movies, After Sex and Quick Sand.   Anchored by lyricist Swann's crystal-clear and expressive vocals and composer/arranger Morykit's multi-instrumental musical ability, with a sound that ranges from full-on Americana heartland rock to country, blues, R&B, world beat and New Age, Gypsy Soul have graduated from playing arts and wine festivals throughout the western states to headlining the prestigious 2,200-seat Britt Festival in their current home of Jacksonville in beautiful southern Oregon. They have had a Top 40 hit at AC radio in "Silent Tears," scored a Top 10 on the International New Age and Folk charts and have won numerous independent music awards along the way, including honors at the Lilith Fair, Independent Music Awards and Just Plain Folks.   From the start, Cilette and Roman have done things their way, gathering a devoted fan base with their personal approach and compelling story, which continues on Gypsy Soul's tenth album, the aptly titled The World Is My Country, for their own indie Off the Beaten Track Recordings label.  The name of the album comes from the famous quote by American revolutionary Thomas Paine: "The world is my country, all mankind are my brethren and to do good is my religion."   The new album represents both a personal and musical rebirth, coming after a trial separation that found the couple living down the road from one another, while continuing to perform together as best friends. New songs like the heartland rocker "Always Been You" and the acoustic ballad "Where Did We Go Wrong" address the ups and downs of a relationship that is now renewed and more vital than ever, a musical couples therapy. Produced and recorded in their home studio on Pro Tools Digi002, The World Is My Country offers a wide range of styles, from the somber cello which marks the moody, intense, cinematic emo-rock of "Love's the Only Thing" to the slinky, bass and drums R&B feel of "I'm Calling In," with it's shimmering pop chorus, a tale of a soul-searching journey through darkness only to discover the answers were within the whole time. The live acoustic "One," about "courage and self-empowerment," was inspired by the 13-year-old Pakistani activist Malala Yousafzai who was shot in the head by Taliban gunmen for supporting girls education, while the country ballad "One More Day," written after 9/11, is a reminder of life's fragility and the urge to experience it to the fullest.  Roman shows off his virtuosity on the jazzy, cinematic "My Heart" and the dreamy, trance-like "Firedance," while Cilette's stunning cover of John Prine's "Angel from Montgomery" was inspired by Meryl Streep's character in the movie, The Bridges of Madison County, and her difficult life decisions.  After nearly 15 years, Gypsy Soul has had some brushes with the mainstream record industry, which has taught them to satisfy themselves first, rather than any commercial expectations. Like The Civil Wars or Swell Season, of the movie Once fame, Gypsy Soul is a duo with an intimacy that comes through clearly, attracting listeners via a DIY back story every bit as compelling. It's a message Gypsy Soul continues to spread, pure of heart, everywhere they go.

Here's what you say about
Gypsy Soul - World Is My Country.