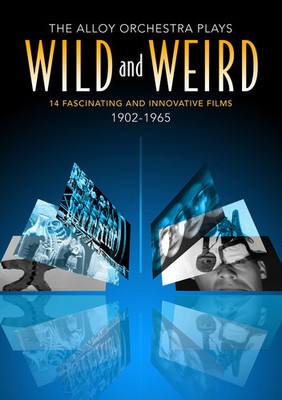 Here are fourteen exciting short films, some favorites, others unfamiliar, produced between 1902 and 1965. They were photographed silent, but they're not silent anymore. All boast new music composed and performed by the Alloy Orchestra, a three man ensemble that critic Roger Ebert has called 'the best in the world at accompanying silent films'. Alloy Orchestra shuns the nostalgic approach, successfully using found percussion and state of the art electronics to reinvigorate films for new audiences with it's unique sound, heard here in a spectacular variety of styles. Following D. W. Griffith's curtain raiser Those Awful Hats from 1909, the program proceeds in chronological order with many of the shorts separated by vintage hand painted slides created for use in movie theaters a century ago. The selections are a Trip to the Moon (by Georges Melies, with his original English narration), Dream of a Rarebit Fiend (Edwin S. Porter), Red Spectre (Ferdinand Zecca, Segundo de Chomon) the Acrobatic Fly (Percy Smith), the Thieving Hand and Princess Nicotine (Vitagraph Studios), Artheme Swallows His Clarinet (Eclipse Films), the Cameraman's Revenge (Ladislas Starewicz), the Pet (Winsor McCay), the Play House (Buster Keaton, in a beautiful copy with all original titles), Filmstudie (Hans Richter), the Life and Death of 9413, a Hollywood Extra (Robert Florey, Slavko Vorkapich and Gregg Toland), and Clay, or the Origin of Species (Eliot Noyes, Jr. ).

Here's what you say about
Wild and Weird: The Alloy Orchestra Plays 14 Fascinating and Innovative Films 1902-1965.