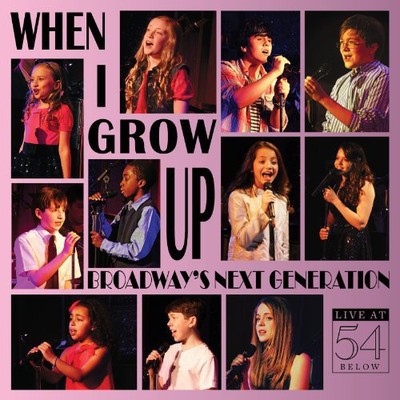 This 2013 release features some of Broadway's youngest and brightest upcoming stars from shows such as a Christmas Story, Mary Poppins, Bonnie & Clyde and Evita.! "When I Grow Up: Broadway's Next Generation" is not your typical kid's cabaret: these future stars tackle the adult repertoire of their heroes, performing tunes from shows such as Avenue Q, Once on This Island, Next to Normal, [title of show], Company, Into the Woods and more! Appearing on the album are Caleb McLaughlin (The Lion King), Emily Rosenfeld (Annie), Ethan Haberfield (Mary Poppins), Grace Capeless (A Christmas Story), Isabela Moner (Evita), Kelsey Fowler (Grey Gardens, Sunday in the Park with George, Mary Poppins, Bonnie & Clyde), Matthew Gumley (Mary Poppins, Elf, Addams Family, Beauty and the Beast), Matthew Schechter (Waiting for Godot, Mary Poppins, Elf, Newsies), Neil McCaffrey (Mary Poppins, Billy Elliott), Rozi Baker (Shrek, Mary Poppins, Bonnie & Clyde) and Zoe Considine (A Christmas Story). The 54 BELOW show was conceived by Van Dean, directed by Kenny Howard with music direction by Michael J. Moritz, Jr. and assistant directed by Yvette Kojic. The album is produced by Michael J. Moritz, Jr. and executive produced by Van Dean and Kenny Howard, of the Broadway Consortium, and Ken Mahoney.

1) The Song of Purple Summer [From Spring Awakening]
2) Show Off [From the Drowsy Chaperone]
3) Agony [From Into the Woods]
4) You Can't Win [From the Wiz]
5) When I Drive [From Bonnie ; Clyde]
6) Mister Cellophane [From Chicago]
7) A Summer in Ohio [From the Last Five Years]
8) Superboy and the Invisible Girl [From Next to Normal]
9) Grow for Me [From Little Shop of Horrors]
10) Getting Married Today [From Company]
11) Worlds Apart [From Big River]
12) Waiting for Life [From Once on This Island]
13) You Could Drive a Person Crazy [From Company]
14) Farmer Tan [From Pump Boys and the Dinettes]
15) Bring the Future Faster [From Rooms a Rock Romance]
16) Agony (Reprise) [From Into the Woods]
17) A Way Back to Then
18) Someone to Fall Back on [From Wearing Someone Else's Clothes]
19) I Believe [From Book of Mormon]
20) For Now [From Avenue Q]
21) Outro