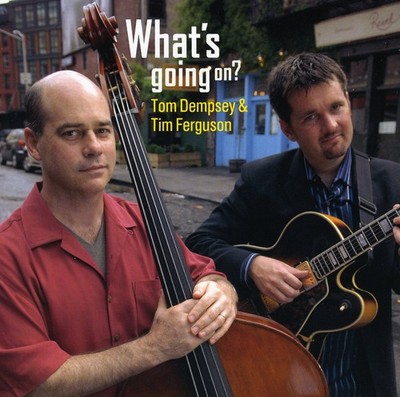 'What a marvelous duo! Great tunes, terrific solos and careful listening to each other. Tom Dempsey and Tim Ferguson do it all and SWING!' -Jim Hall Playing duo is a unique experience. It is a delicate dance full of possibilities and challenges. For close to 20 years we have been playing together as a duo and have performed throughout the US, Europe and the Caribbean. In the mid 1990's we made our first recording as a duo. Since then we have continued to work together and have always talked about doing this project. The time finally came this spring. We had a limited window to record before our respective summer touring schedules began. So this seemed like the time to do this project. We figured that it would be relatively easy to record the duo because of our history of playing together. All we needed was a few rehearsals and we would be able to complete the project easily. Well....that's at least what we thought. We each began bringing tunes to the rehearsals and soon discovered we had our work cut out for us. Both of us have a real affinity for playing duo. And this recording helped stretch our creativity and musicianship both individually, as well as that of the duo. As we began preparing, it became apparent that after playing live all of these years, we have developed a unique identity as a group. Capturing that feeling of playing live coupled with the repertoire we chose proved to be quite challenging and in the end, very rewarding. Between the compositions, the arrangements and the performance, this recording represents a fresh treatment of these songs that pays tribute to these great composers and at the same time, captures our interpretation of the meaning embedded into the lyrics and titles of these compositions. In the past we had recorded mostly originals. We released a quartet recording in 2002 that primarily featured our individual compositions. For this recording, we decided to put a couple of originals together with a number of different tunes we have been playing for years. We also wanted to add some new tunes to the repertoire. In doing so, we began to unearth a rich assortment of compositions. Tunes from the pens of Thad Jones, Mal Waldron, Billy Strayhorn, Barry Harris, Hoagy Carmichael and Charlie Haden as well as a traditional spiritual. While all of these compositions resonate for both of us, the title track, "What's Going On" is particularly apropos. We began performing this tune several years ago in concert mostly because we both like the song. Both of us are sensitive to the state of humanity within our country as well as within our world and yes.....we do talk current events and politics (go figure). But like all of the choices made for this project, the decision to record this tune grew organically out of our history of playing together and where we are as individuals today. When we set out to do this project we didn't know what the title would be. But as is often the case, we found the answer to all of our questions about this project in the music itself. By no means are we trying to recreate one of the most important Motown Records in history. Rather, this recording represents a collection of tunes that have been important to us as musicians and as a duo. Coincidently, this project was recorded during a time in our lives on this planet where we have a lot of questions and concerns. Not the least of which is "What's Going On?" Music is a collection of vibrations. Vibrations that make us feel emotions that are sometimes unable to be put into words. We hope that this collection of tunes and performances brings you the same feeling of joy that we have experienced recording, performing, traveling and growing together. Tom Dempsey Tim Ferguson August 2007.

Here's what you say about
Tom Dempsey - What's Going on.