Claude Dorsey - What a Wonderful World 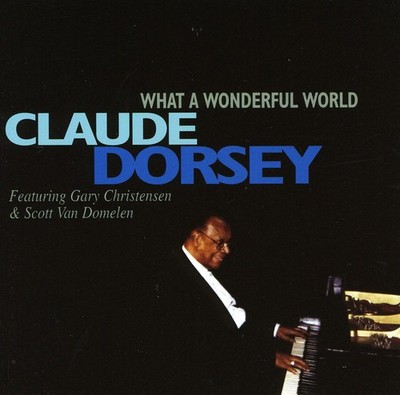 CLAUDE DORSEY '...an undimmed talent: a voice alive to the possibility of the words, hands still ready to interpret melodies that have endured as classics.' ~ Dave Luhrssen, entertainment editor, Shepherd Express newspaper. 96 YEAR OLD HAILS FROM GEORGIA.... Though his music was silenced when he passed in 2010, his only CD immortalizes legendary jazz pianist Claude Dorsey A Milwaukee resident since 1928, (born 1914), this CD remains a tribute to the man, his music, a nearly forgotten era. 40 YEAR GIG DREW BASIE, DUKE, AND MORE...... Many of Claude's current fans first remember hearing him play at the famed Clock Bar, in downtown Milwaukee, where he played a nearly 40 year stint, 6 nights a week! Those gigs, from the '40's thru 1982, drew such admirers as Lou Rawls, Tony Bennett and his orchestra, Count Basie and his band, Bob Hope, Duke Ellington, and others. PLAYED FOR BILLIE..... Claude has played in the presence of a long list of the finest jazz and blues musicians, among them his former sideman, Joe Williams; Nat King Cole, Duke Ellington, Liberace, and Count Basie. Among his fondest memories are the times he accompanied Billie Holiday on piano during a private parties. AWARDS KEEP COMING..... In 2005, the Wisconsin Area Music Industry presented the award for 'Best Traditional Jazz Artist' of the year, to Mr. Dorsey, for his continued excellence in live performance. He was also the recipient of Wisconsin's highest music honor, as he gratefully accepted the 'Hall of Fame' Award, during the 2001 W.A.M.I. Awards Show. NEVER TOO LATE..... Just 7 years ago, at 89, Claude Dorsey completed his first-ever studio recording, titled 'What a Wonderful World'. (Musical Moon Productions, 2003) The CD contains 11 jazz standards and a Dorsey original, 'Summer is Over,' written in 1946, yet timeless in it's melody and lyrics. On the CD, Claude is backed by musicians Gary Christensen lending exceptional rhythms on upright bass, and Scott Van Domelen, whose soprano saxophone solos shine on nearly every track. RARE GEM.... Considered a gem of a jazz/blues recording, this CD showcases the talents of a musician from a largely bygone era, still vibrant and energetic at the piano. Order a CD, available in very limited supply.

Here's what you say about
Claude Dorsey - What a Wonderful World.