Snoozie & the Miltonics - We Make Noise 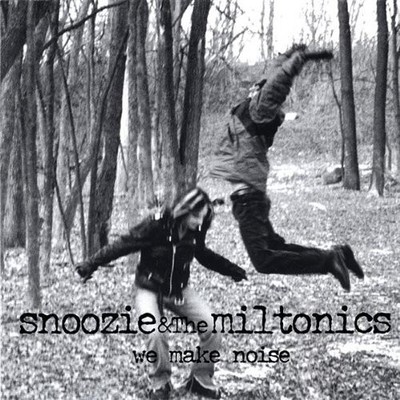 From their beginnings three years ago in Chicagoland open mics and cafes Snoozie &The Miltonics have evolved from coffehouse duo to rocking quartet. The moment they acquired a rhythm section the foursome recorded their EP, We Make Noise, and have been ripping up Chicago stages from the Beat Kitchen to the Empty Bottle. Snoozie &The Miltonics come complete with a garage edge and tightness that exhibits their passion for playing. Their songs will burrow into your ears for a day or two, and their clever attitude can get you giggling. MILTON DIXON (guitar, vocals) has been making noise for all of his life. He started playing Suzuki violin at the age of four and as a teen was lured to the guitar. He now teaches Suzuki guitar at The Music Institute of Chicago and Barrington Suzuki Music School. Somewhere along the way, he found a B.S. in Music Business from Elmhurst College. Some of Milton's louder pursuits include playing jazz-fusion with The Gretch Guitar Ensemble and Latin-pop with Contratiempo. SUSIE INVERSO (vocals, guitar) grew up a band geek and still is one. She began playing the trumpet at age 10, and got her first guitar at age 14. She studied music at Elmhurst College, like her cohorts, and has performed in numerous concert bands, marching bands, orchestras and jazz bands. Along with singing and strumming with Snoozie &The Miltonics she plays bass for Chicago electro project Flutter. LEO PEÑA (drums) was born in the suburbs of Mexico City. He moved to Chicago at age 15 and began playing drums in various high school bands, exploring almost all styles of music. Leo attended Elmhurst College and continued experimenting musically in hip hop and acid jazz. Leo teaches History and Spanish and has played in the Chicago area extensively with numerous bands, including traditional Mexican 'Bandas' and Tex-Mex groups, jazz trios, Hip Hop and pop groups, theatre, and local cajun band 'The Midway Ramblers'. CHRIS STUTZMAN (bass) also has a deep-rooted passion for making noise. His musical adventure began with Suzuki piano as a wee lad and meandered through saxophone, vocal training, guitar and most recently bass. He also attended Elmhurst College where he was involved in choir and met his noise-making pals. Since college he has been involved in numerous musical projects with said pals (such as Broadcast Day). He likes many styles of music, plays many of them and hopes he never has to stop. Amen.

Here's what you say about
Snoozie & the Miltonics - We Make Noise.