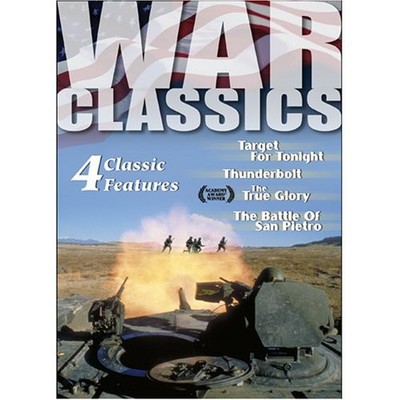 Target for Tonight (1941, Black & White 49 minutes.)Target for Tonight is a first-class wartime docudrama, chronicling the experiences of a Royal Air Force bomber and it's fearless crew, all played by actual members of the RAF. After touring various ground-crew stations, tactical centers, and map rooms, director Harry Watt goes inside the bomber itself as the crew prepares for a mission over Germany. The operation that ends almost before it begins when the plane is riddled with machine gun fire in a terrifying true-life sequence. Thunderbolt (1947, Color, 42 minutes) In this exciting and intriguing World War II documentary, the P-47 Thunderbolt fighter aircraft is examined, as well as the significant role it played in the daring missions executed over Europe and the Pacific theatre in the 1940s. The True Glory (1945, Black & White, 83 minutes)Compiled from genuine WWII footage of the allied invasion of Europe and captured by the lenses of thousands of cameramen, The True Glory begins it's tale with the tragedy of D-Day and covers all the major battles leading to the fall of Berlin. Add to this engaging historical perspective the intriguing personal stories of those involved in this monumental war, add to it a powerful prologue read by General Eisenhower, as well as the potent narration of Robert Harris and Peter Ustinov, and there you have the 1945 Academy Award winner for best documentary. The Battle of San Pietro (1945, Black & White, 38 minutes)The confrontation at San Pietro was one of the fiercest conflicts of World War II. An Italian city, San Pietro, was taken over as a German stronghold where thousands of Allied soldiers were massacred. In this grueling, bloody battle, the 143rd infantry lost twelve of it's six.

Here's what you say about
War Classics 6.