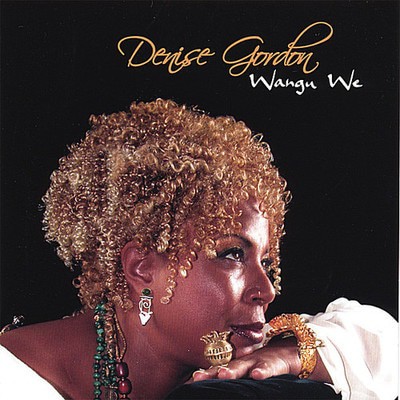 'Wangu We' means 'your mine' in Swahili, the lingua franca of East Africa, and the birthplace of this, my debut album... All the songs are mine and tell a story and place a marker in my growing musical journey. My musical inspirer Budi and I were sitting on the shores of Lake Tanganyka in Burundi, Central Africa and composed the type of song I have always wanted to sing. Suma Rakk (my brother) Bashir Dia produced the title song in Burundi. The song was inspired by my feelings for a nice guy, but I was too afraid to let him know, but in a song I could express: "I want to take your hand, and place it where my love-burns the most for you". The African continent is my engine, my fuel, my cocoon for my creativity and where I have called home for the last 15 years. It was my work in humanitarian assistance that has brought me there, but it is the music that inspires me to stay. It is where I feel the most comfortable. My mother will tell you I have always sang from the shower to being a two-time winner at the Amateur Night at the Apollo and getting a second call-ck for the musical Broadway show "RENT". Strangely enough it was in post-genocide Rwanda where music took over my being and was my salvation as I tried to grapple with man's inhumanity to man. After enriching my early reperatoire with my favorite R&B artists, I was ready to sing my own songs, and thus the three-year journey to Wangu We began. "My Ideal Man" is the first piece I ever wrote. My producer Robert 'rkay' Kamanzi reminds me that though it was intended to be an interlude, at three minutes in length, it is truly something else. I just had a great time creating it with self-taught, Kenyan pianist, Aaron Rimbui, the pianist, and my first venture in spoken word was born! 'Imagine How I Feel' was written for the heartfelt absence of a friend and 'Not the Way We Planned It' was inspired by the end of my marriage to a good man. Michael 'Ibo' Cooper formerly of Third World, laid the structure for the songs and support to my musical journey. Nyash from the hot Kenyan Hip Hop group 'Kleptomaniacs' gave me encouragement to 'Keep on Movin'. He brought the attitude like he was stepping straight out of Brooklyn! A page was turned in the maturity of my songwriting, and the conveyance of the message with the penning of 'Black Man' that laments the condition of Black men in America and Africa. When I traveled to Tanzania, I met Tatunane. They were in the flow I was trying to learn, taking traditional African rhythms and songs and playing them with modern instruments. ....When I asked if I could sit -in with them, they told me to come with an original composition. 'Fusions' was born. It charts how 'I found my voice where my ancestors left it, wrapped in discovery of my new African world'. One evening while in Nairobi, I was watching television. On a commercial there were these fierce Lady Smith and the Black Mambazo-like harmonies, making me believe they were direct decendants of the Jo'burg sound. The next day I told Rkay that I would love to incorporate their sound in my song and he said that the group was actually Kenyan! Kayamba Africa authenticated Fusions with their harmonies and chants on a tightly produced track. We went on to grow in our Afro - Fusion vibe with 'Suddenly Sudan' where Rkay heavy drum beats make you feel the suffering of Darfur and southern Sudan. Rkay invited Lam, a former child soldier and refugee from Sudan, to rap in his mother tongue of Nuer and chant that the youth must pull together. What a blessing to have met Helen Akoth Mtawali from Kenya, who truly brought an African tear to my songs with chants and her native Luo. Rkay tells me that the first album holds the mirror up to the second album. I am so excited about this first project and I envision an all-afro-fusion mix for my sophomore effort. Let me know what you think!

Here's what you say about
Denise Gordon - Wangu We.