Divers - Walkies in the Park 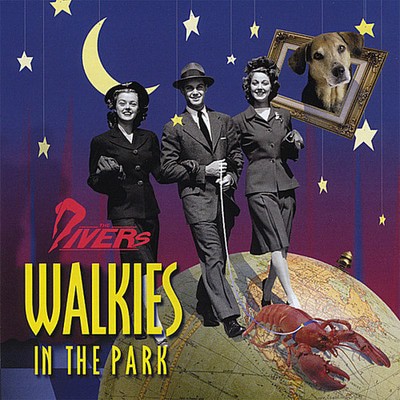 The Divers have been performing together, with some variation in membership, since 1991. Peter Bloedel, Loren Halvorson, and Wil Bauermeister originally formed the group and began playing for coffee house and folk festival audiences, mixing upbeat original and cover tunes with a good deal a physical humor and nearly random acts of playfulness. One early performance took place at a room in the Gustavus Adolphus College student center called 'the Dive.' It was this venue that gave the Divers their somewhat puzzling name. Several years and two recordings later, Wil Bauermeister decided to leave the group to form a band of his own. Local singer/songwriter Jason Gray and bassist Eric Halvorson, Loren's brother, replaced him and a quartet was created. A year or so after that, during the recording of the Divers' third release, Walkies in the Park, drummer Andy Overn was added to the group, bringing the number of Divers to five. Since then, Jason has departed to pursue a successful solo career and the group is a quartet once more. The Divers now find themselves family men with real grown-up jobs. Though the music and antics are slightly more refined than that of the original college student trio, the Divers continue to entertain audiences of all ages with original music, offbeat humor, and high-energy performances. While their music is difficult to categorize, elements of folk, rock, jazz, funk, and bluegrass are blended to produce music that, as surprising as it is to the Divers, people actually seem to enjoy!

Here's what you say about
Divers - Walkies in the Park.