Organissimo - Waiting for the Boogaloo Sisters 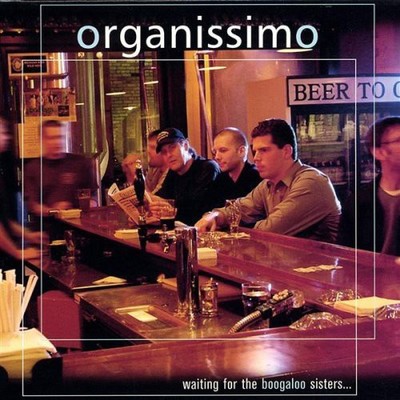 UPDATE - 'Waiting For The Boogaloo Sisters...' named one of the best records of 2003 by Jim Wilke's nationally syndicated NPR jazz show, Jazz After Hours! __ UPDATE - 'Waiting For The Boogaloo Sisters...' won the Jammie Award for Best Jazz Album 2003!!! __ UPDATE - Larry Hollis, in his review of 'Waiting For The Boogaloo Sisters...' in Cadence magazine says, 'Organ aficionado's should consider this a red alert.' If you like Hammond B3, you need this disc!! __ --Good Things Come To Those Who Wait - M. Smith, Feb. 2003-- 'Waiting For The Boogaloo Sisters...' is the title of the debut record by Organissimo, but it could also be a description of the trio's very existence. 'Joe and I have waited to do this record for six years. All we needed were the tunes themselves and Randy,' organist Jim Alfredson laughs. Jim and guitarist Joe Gloss met in the fall of 1996 as students in Michigan State University's jazz combo program. They formed many trios and quartets together, but it wasn't until a master class with New York saxophonist Ron Blake that they decided to make a record. Not only that, but they were determined to have Ron on the album. Six years later, in the fall of 2002, Jim and Joe entered the studio with the missing link, exceptional drummer Randy Marsh, to record as Organissimo. And they even got Ron Blake as well! Good thing they waited. 'Waiting for the boogaloo sisters...' features nine original compositions exploring a wide range of styles, colors, and influences. The record opens with Meet Me @ 11, an odd metered jaunt with some unexpected twists and turns. Curt solos by organ and guitar frame a catchy melody that belies Randy's off kilter rhythmic pattern beneath. The funky Clap Yo Hands features Ron Blake on tenor saxophone. 'We wrote it around a Zigaboo Modeliste drum beat,' Jim Alfredson explains. 'The tune really wrote itself, but Ron's playing definitely added the finishing touch.' Blake quotes some well known funkateers in his solo over a danceable groove. Young's Dream, a tribute to organist Larry Young, has a rather ethereal birth. 'It's based very closely on his tune 'Tyrone' and the melody actually came to me in a dream,' Jim recalls. 'I dreamed I was doing a gig with the trio and the audience was really digging this tune we were playing. The dream lasted just long enough to get to the head out of the tune. Then I woke up and ran to the organ to figure it out!' Pre Dawn Rain is a gorgeous ballad by Joe Gloss. Joe's acoustic guitar states the melody alone at first and eventually is joined by the organ and drums which lead into a beautiful solo by Joe. Ron Blake follows invoking both Coltrane and Charles Lloyd within his solo. Ron and Joe then play the melody together and the song ends as quietly and gently as it began. 'Waiting for the boogaloo sisters...' is an amazing debut from this promising group. Jim, Joe, and Randy fit perfectly together, crafting a sound all their own and successfully extending the tradition of the organ trio. Good things do come to those who wait! __ Read more about Organissimo on our official website! And while you're there, check out the Organissimo Jazz Discussion Forums, the hottest jazz community on the web!

Here's what you say about
Organissimo - Waiting for the Boogaloo Sisters.