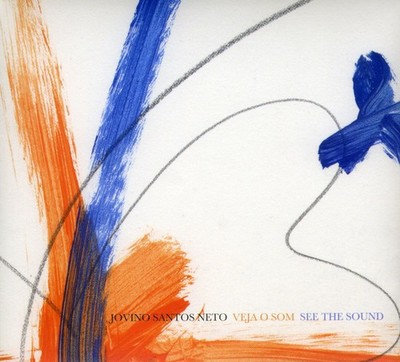 See the Sound, the much-anticipated follow up to Jovino Santos Neto's two 2008 Adventure Music releases, Live at Caramoor (with Weber Iago) and Alma do Nordeste, is a two-CD set of duet performances that pair the acclaimed Brazilian pianist with a veritable pantheon of North and South American musicians. The CD's twenty tracks (ten recorded in the US and ten in Brazil) feature collaborations with vocalists Gretchen Parlato, Monica Salmaso, Tom Lellis, Paula Morelenbaum and Joyce Mareno, as well as with instrumentalists Mike Marshall, Paquito D'Rivera, Bill Frisell, Airto Moreira, Anat Cohen, Joe Locke, Ricardo Silveira, Teco Cardoso, Danilo Brito and Gabriel Grossi. Recorded in Seattle, New York City, Los Angeles, Rio de Janeiro and São Paolo over the course of a year, See the Sound includes both original compositions and new arrangements of well-known songs by Antonio Carlos Jobim, Milton Nascimento, Hermeto Pascoal and Djavan. The duets on See the Sound are all the more remarkable considering that Jovino had never performed with a majority of these guest artists and that they deliberately chose to record material that none of them had much experience performing live or in the studio. The music that resulted from these intimate collaborations captures, in Jovino's words, "the honesty of the meeting of the spirits."