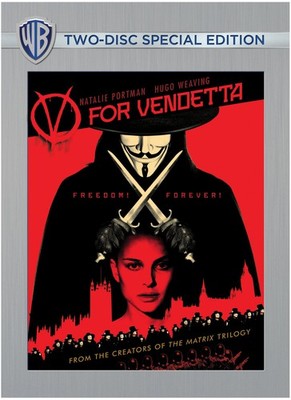 'Remember, remember the fifth of November, ' for on this day, in 2020, the minds of the masses shall be set free. So says code-name V (Hugo Weaving), a man on a mission to shake society out of it's blank complacent stares in the film V for Vendetta. His tactics, however, are a bit revolutionary, to say the least. The world in which V lives is very similar to Orwell's totalitarian dystopia in 1984: after years of various wars, England is now under 'big brother' Chancellor Adam Sutler (played by John Hurt, who played Winston Smith in the movie 1984), whose party uses force and fear to run the nation. After they gained power, minorities and political dissenters were rounded up and removed; artistic and unacceptable religious works were confiscated. Cameras and microphones are littered throughout the land, and the people are perpetually sedated through the governmentally controlled media. Taking inspiration from Guy Fawkes, the 17th century co-conspirator of a failed attempt to blow up Parliament on November 5, 1605, V dons a Fawkes mask and costume and sets off to wake the masses by destroying the symbols of their oppressors, literally and figuratively. At the beginning of his vendetta, V rescues Evey (Natalie Portman) from a group of police officers and has her live with him in his underworld lair. It is through their relationship where we learn how V became V, the extremities of the party's corruption, the problems of an oppressive government, V's revenge plot, and his philosophy on how to induce change. Based on the popular graphic novel by Alan Moore, V FOR VENDETTA's screenplay was written by the Wachowski brothers (of THE MATRIX fame) and directed by their protege, James McTeigue.

Here's what you say about
V for Vendetta: Two-Disc Special Edition.