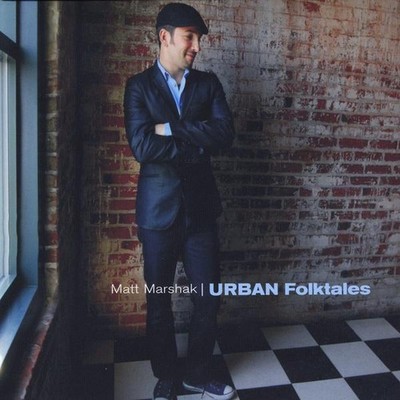 I'm confident that "Urban Folktales" will be regarded as one of the top contemporary jazz CDs of 2011. This is the Matt Marshak you've been waiting for. Absolutely stunning." Brian Soergel, JazzTimes There's no denying Matt Marshak's mastery of the contemporary jazz format, as he lays down original, stylish guitar licks with shades of the blues, rock, pop, soul and-of course-jazz. On April 1, 2011, Marshak returns with his freshest and cohesive work to date with Urban Folktales (Nuance Music Group). It's his sixth major release and bound to be on Top 10 lists. "It's my first theme record, one that sticks to the same vibe from top to bottom," says Marshak. "I really wanted to capture the essence of the late-night city sound, an intangible vibe I've always been drawn to." Marshak is known for his lively, fun and energetic live shows, and it's on stage where he drew the inspiration for Urban Folktales. He'd recently noticed that fans enthusiastically responded to the tune "Seduction" from his 2009 CD Family Funktion (Nuance Music Group). "It has a combination of neo- soul, R&B, jazz and funk," he says. "People always ask about 'Seduction' after we play it. They told me they really like the open-ended, airy sound that's at it's essence." With the positive feedback fresh in his mind, Marshak decided to craft an unforgettable CD of the style of music he knew his fans would love-as well as new listeners. The 13 original songs on Urban Folktales, from "Next to You," "A Silent Knowing," "Harlem River" and others, certainly capture the "Seduction" vibe, making for a stunning work and cohesive whole, a welcome change from today's single-song-download mentality. Of course, Marshak's guitar work-sometimes refined, sometimes gritty, always compelling and listenable-is what Marshak's sound has always been about. But on Urban Folktales, his guitar often yields to the overall sonic palette. In fact, on several excursions, Marshak dials down his chord changes, allowing the emphasis of dynamics and emotions to carry the listening experience instead of overwhelming it with musical information. Being one of the finest guitarists in the contemporary jazz genre means that Marshak also digs experimenting with his guitar sounds. "The straight hollow- body jazz guitar sound to me is everywhere today," he says, "so I really wanted to experiment and have the guitar leads to be a bit different and fresh." Specifically? Well, you've no doubt heard plenty of contemporary jazz songs that use the cool wah-wah guitar pedal sound as a rhythm accompaniment. Marshak decided to turn that on it's head. "I had never heard anybody using it on the lead in contemporary jazz," he says. On the tracks "Teddy P" and "Glen Burnie," he does just that. "The funkiness and expressive sound it allowed me was refreshing. Not only do you have hands at work, but the foot pedal adds another level of expression to the lead sound." It a sound that sound more "vocal."

Here's what you say about
Matt Marshak - Urban Folktales.