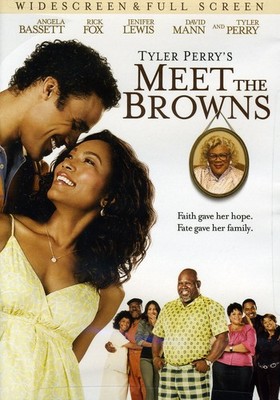 Adapted from the stage play, TYLER PERRY'S MEET THE BROWNS is a touching family drama and very funny romantic comedy rolled into one. Angela Bassett gives one of the best performances of her career as Brenda, a single mother trying to raise three children, from three different men, in the Chicago projects. After the plant where she works with her best friend, Cheryl (Sofia Vergara), closes down, she can no longer afford her rent, electricity, or day care. But when a surprise letter arrives telling her that the father she never knew has died, and inviting her to the reading of the will and the funeral in Georgia, she has nowhere else to go, so she and her kids, Michael (Lance Gross), Tosha (Chloe Bailey), and Lena (Mariana Tolbert), head down south to meet her half-sisters and -brothers. Director Tyler Perry Star Tyler Perry, David Mann, Tamela Mann, Angela Bassett, Lance Gross, Chloe Bailey, Special Features: Widescreen Audio: Dolby Digital 5.1 - English Dolby Digital 2.0 - Spanish Subtitles - English, Spanish Runtime: 100 minutes.

Here's what you say about
Tyler Perry's Meet the Browns.