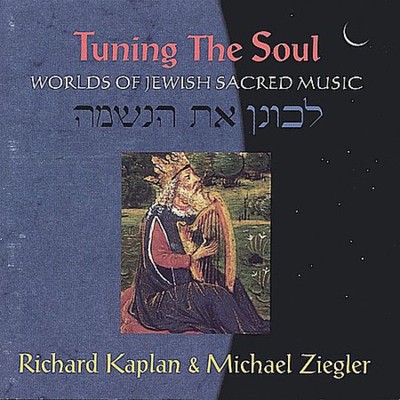 ' I love this CD! 5 stars! ' - New York Jewish Week Nearly 8000 copies of TUNING THE SOUL have been sold in the United States, Mexico, Canada and Europe over the past nine years! Performing professionally as a singer, songwriter, and pianist for over 30 years, Richard Kaplan is also a Cantor, teacher, choral conductor and ethnomusicologist. McCoy Tyner said of him: 'I like his music!' Rabbi Michael Ziegler is a teacher, ritualist, and producer. 'There were a lot of terrific recordings issued last year, but none that I enjoy any more than I do this one. Kaplan and Ziegler have drawn on numerous sacred and folk music traditions, Jewish and otherwise, to find new or neglected settings for Jewish liturgical texts. The result is an album of haunting, moving music performed by both men and a cast of superb guest musicians. Especially recommended to those who love the sounds of Middle Eastern music, the dominant flavor in this mix.' --- George Robinson, NEW YORK JEWISH WEEK 'It's a moving piece of work. It deals with states of mind that I'll enjoy visiting for years to come.' --- Stuart Brotman, BRAVE OLD WORLD 'TUNING THE SOUL is clearly a labor of love. All aspects of the production show great care and effort. The material has been thoughtfully culled from such sources as field recordings and transcriptions as well as earlier recordings by traditional musicians. All of the sources are well identified in the informative, accompanying 20-page booklet. Also impressive is the attention that the producers gave to each selection. While many styles of music are represented, each piece is arranged and performed in a remarkably authentic manner. Kaplan and Ziegler achieved this through assembling accompanists who are specialists in the various styles. Cantor Richard Kaplan's soulful rendition of a meditative niggun, attributed to the Baal Shem Tov, the founder of Hasidism, truly does attune the soul and enables the listener to share in the transformative power of Hasidic music at it's deepest. TUNING THE SOUL will appeal to many types of listeners. Those who simply love Jewish music in all of is varieties will treasure these rare gems. Afficionados of World Music will appreciate the cultural diversity of the various styles and manner of performance. The careful documentation will satisfy the most curious; while those who appreciate open-hearted offerings of spiritual music will be transported by these moving and inspiring treasures from the living storehouse of Jewish tradition.' --- Rabbi Miles Krassen Former Director of Jewish Studies, Oberlin College.

Here's what you say about
Kaplan & Ziegler - Tuning the Soul: Worlds of Jewish Sacred Music.