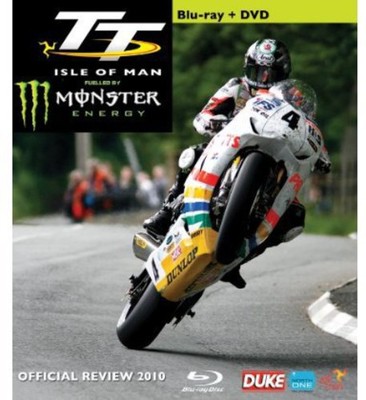 The Official Review of the 2010 Isle of Man TT on Blu-ray brings fans all the action and atmosphere from the world's greatest road race festival in stunning high definition and with amazing sound quality. Blu-ray is the future of home entertainment and if you want to see just what this amazing format can deliver just watch the TT on Blu-ray in 2009 the critics called it 'astounding' (Autosport), the 'best ever TT coverage'?(Motorcycle News) and said it would 'leave you breathless'?(Classic Racer). Following the success of the 2009 TT on Blu-ray we are going a step further this year and giving away a FREE standard DVD 2010 TT review in every Blu-ray box- so if you haven't got a Blu-ray player yet you can enjoy the standard DVD until you join the high definition revolution -?that's DVD and Blu-ray for one great price. Once again making use of the excellent footage captured by North One Television, the action packed review delivers a comprehensive look back at two weeks of speed and drama. The Blu-ray format ensures you enjoy very best high definition footage and sound quality, for a truly exceptional TT experience. With extensive coverage of Practice Week, the five solo races, both sidecar races and the new clean emissions TT Zero event for electric bikes, the Official Blu-ray Review is the definitive story of one of motorsport's greatest events. In addition to edge-of-the-seat race action as the bikes reach up to 190mph blasting around the legendary Mountain Course just inches from walls, houses and hedges, the Official Review features white-knuckle on-bike footage, informed commentary, rider interviews, behind-the-scenes access and special features. The 15-times TT winner John McGuinness leads the entry list for the 2010 TT, while Cameron Donald and Bruce Anstey carry the banner for Suzuki as the manufacturer celebrates it's 50th anniversary. It's an all-star cast, with Michael Rutter, Ryan Farquhar, Guy Martin and many more challenging for solo honors. Among the racers representing the United States are Mark Miller, the fastest American ever around the TT course, AMA Superstock Champion Jimmy Moore, veteran Thomas Montano, who is making his 15th?TT visit, AMA Superbike privateer CR Gitterre and WERA USA Endurance Champion James Vanderharr. Dave Molineux, already a 14-times TT winner, is the man with a target on his back as the best sidecar crews in the world, including drivers like Tim Reeves, Ben Birchall and Klaus Klaffenbock, race for honors ? joined by the new team launched by five-time TT winner Nick Crowe. Plus, the 2010 TT promised a mouthwatering line-up of newcomers, including Hudson Kennaugh, David Johnson, Dan Hegarty and Brian McCormack. This is the Official Review of the 2010 TT, packed with essential action and heart-stopping drama.

Here's what you say about
TT 2010 Review Blu-ray (US Version) Incl Standard.