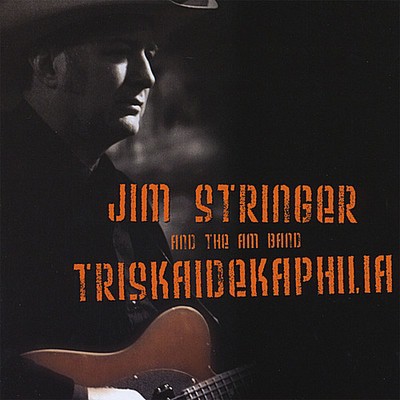 At Jim Stringer's first gig in 1960, he performed Duane Eddy's 'Rebel Rouser'. The years have polished his guitar style, and broadened his musical vocabulary, but the roots are still present and powerful. In fact, "Rebel Rouser" is the opening track of his new CD, "Triskaidekaphilia" (love of the number thirteen). Embedded in the performance are references to thirteen artists/songs that have contributed to his musical education. "Triskaidekaphilia" is a commemoration of Stringer's sixty years on the planet, and pays homage to the music, the people, the life and loves that have pioneered, shared and followed his path. The music cuts a wide stylistic swath, something which has become expected in Stringer's CDs. There's the celebratory rockabilly of "Here's the River", written in remembrance of Stringer's father. "Chevy Headed West", a poignant memoir of a pair of late 60's twenty year olds on the day of the Robert Kennedy assassination, would have fit neatly into Johnny Cash's repertoire. Stringer's early Hootenanny performances are recalled in "The Right Direction", which incidentally, reveals the secret to enlightenment. The dark country waltz (emphasis on DARK), "I Saw Them Together", is a miniature episode of "Law & Order". A country shuffle, a few two-beats, and a blazing instrumental tribute to Hank Garland complete the thirteen track program. One reviewer called Stringer's previous CD, "In My Hand", "...a 38 minute clinic on how to write, perform, and engineer a real country CD." If that is so, then "Triskaidekaphilia" may well be the graduate level course.

Here's what you say about
Jim Stringer - Triskaidekaphilia.