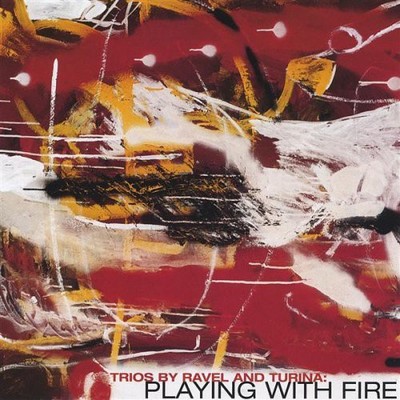 The eaken trio is proud to introduce this new CD with recordings of the 1915 trio by maurice ravel and the op. 76 trio in b minor by joaquin turina. The eaken trio has been performing these two works since their start in the late 1980's and they have become two of the most popular works in the their repertoire the trio has toured extensively throughout the United States, europe and Canada and this will be their 10th CD. The trio specializes in audience building residencies and benefit concerts to raise awareness of the homeless problem in the United States, raising 1000's of dollars to support such organizations as habitat for humanity, project s.h.a.r.e., safe harbor and the animal alliance. The trio is heard regularly on npr and pri which includes two hour long programs titled 'home for the holidays' that are aired on over 150 national public radio stations each holiday season. The trio has performed at carnegie hall three times and has toured in europe during two of their last four seasons. Their first holiday CD 'home for the holidays' was nominated for a grammy the piano trio from 1915 by maurice ravel ( 1875 - 1937) born in the pyrenees mountains in the basque region bordering France and Spain, it is not surprising that ravel choose to open this glorious work with an insistent basque rhythm, first introduced by the piano and then restated by widely spaced strings. After a dramatic surge to climatic heights exploring infinite mid eastern and impressionistic sonorities, echoes of the basque rhythm return to close the movement with dramatic effect. The second movement, titled pantoum, was inspired by an oriental verse form popular in ravel's day. The movement is set in a traditional 'minuet and trio' form that was often used in the great 19th century chamber music and symphonies as the second movement. Because of the exotic nature of the harmonies and rhythms, ravel stretches this old form to dramatic new dimensions. The haunting passacaille movement glorifies all three instruments individually and as one. The slow introspective 'canon' theme of eight bars, introduced by the piano, is followed by nine variations ranging from pure simplicity to incredible complexity. The final begins with supreme delicacy in an aura of oriental sonorities achieved by the strings playing arpeggios in harmonics to provide the foundation for the introduction of the main theme by the piano. The movement travels through a palate of incredible colors reaching heights beyond most any other chamber work to date. The dynamic close is so intense that it is difficult to imagine ravel achieves it using only three instruments. As early as 1895, ravel was infusing traditional forms with new colors, harmonies, rhythms and meaning, always exploring dynamics and virtuosity within sensitivity and sensuality. Rarely does any composition achieve the mastery and synthesis of these qualities to the degree as does the piano trio of 1915. The piano trio in b minor, op. 76 by joaquin turina (1882 - 1949) turina was born in seville, Spain and spent most of his years living and working there. He was a pianist of great renown and was sent to the Paris conservatory to study both piano and composition. Although he learned of many new 20th century technics like impressionism and atonality with close associations and teachers like d'indy and debussy, it became the influence of the composers from his homeland, defalla and albeniz, that convinced turina to find his voice in the traditional folk music of Spain. The trio in b minor, composed between july 19, 1932 and february 6, 1933, reflects the essence of turina's style and genius. You can hear themes influenced by andalusian folk music and vibrant Spanish dance rhythms throughout the work. Set in three movements in a cyclic pattern (as was typical of the writing of turina), the work opens with an allegro moderato theme inspired by brahms. This theme is contrasted by an exquisite second theme that reminds one of the sounds of polynesia. The second movement is a setting of the very popular 'zortzico' - the most famous dance form from the basque region set in 5/4 meter. The finale movement introduces two new themes and is set in a very flowing, free form as a contrast to the vibrant rigidity of the second movement's rhythm. To achieve the cycle, turina gives the effect of writing the last movement backwards to incorporate the opening theme of the first movement to bring the work to a dramatic close. One can feel the artistic relationships between the turina and ravel trios - from the dramatic use of basque rhythms in both, to their developments of great complexities in color and texture. As is true with the music of all great composers, there is no confusing the style, greatness and uniqueness of each of these works. They go together beautifully on this CD and give the listener the opportunity to experience the sublime artistry of these two great 20th century composers. Play list maurice ravel: trio (1915) 1 modere 9:49 2 pantoum 4:47 3 passacaille7:42 4 final 5:41 joaquin turina: trio in b minor, op. 76 5 lento-allegro molto moderato 6:17 6 molto vivace 2:39 7 lento-andante moss 5:27 total playing time: 42:34.

Here's what you say about
Eaken Piano Trio - Playing with Fire.