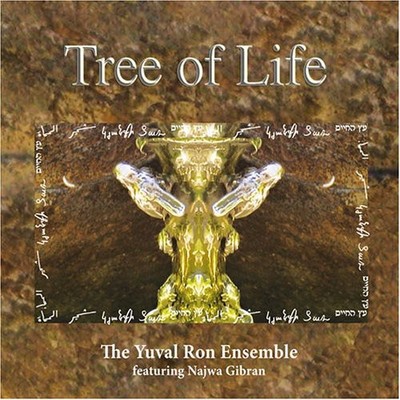 'TREE OF LIFE' a new CD by The Yuval Ron Ensemble featuring Najwa Gibran Manufactured and distributed by Magda Records. Tree of Life is an exciting new CD by the world renowned Yuval Ron Ensemble featuring the Arabic female vocalist Najwa Gibran and produced by Israeli born world music scholar-composer-performer Yuval Ron. In it's second album to date, the ensemble weaves together the sacred and folkloric music of Andalusia (Southern Spain), the Middle East, North Africa, and Central Asia into a rich tapestry of musical and cultural amalgamation. Formed in 1999, The Yuval Ron Ensemble includes Arabic, Israeli and Jewish musicians as well as Christian Armenian artists who are actively involved in creating musical bridges between people of the Jewish, Muslim and Christian faiths, and are dedicated to fostering an understanding of Middle Eastern cultures and religions through music. The Tree of Life, from which this album takes it's name, is a cross-cultural symbol for Life, Humanity, and the Universe, and is sacred to all three major religions of the Middle East. The Tree of Life CD is an inspiring example of a harmonious collaboration between artists from various conflicting Middle Eastern peoples and cultures. The album intertwines music from Morocco, Turkey, Iraq, Israel, Armenia, Andalusia, and Bukhara (Uzbekistan), sung in Hebrew, Arabic, Ladino (a Spanish-Jewish language) and Turkish. Often the songs are sung in alternating languages creating a journey within, as the songs themselves take the listener on a passage from one ethnic world to another. There are devotional prayers and sacred love songs from Hebrew and Arabic sources, Andalusian songs with the inherent influence of the Golden Age of Spain, and new songs by Yuval Ron and Maroon Tannus, which are based on the traditional music of the Middle East and beyond. Producer Yuval Ron has managed to render a plentiful and complex musical experience, creating a new sound with traditional materials without stepping into the less substantial yet fashionable 'fusion' trends of the contemporary World Music styles. In the Tree of Life, tender and delicate moments can be found side by side along with passionate and exciting performances. The album features the legendary Armenian Woodwind master Yeghish Manukyan, who showcases nostalgic, meditative, and energetic qualities with his ethereal Duduk playing, and his breathtaking clarinet virtuosity. Najwa Gibran and Maya Haddi ensue with soulful vocal performances that soar above the dynamic ensemble accompaniments. The Yuval Ron Ensemble has enjoyed overwhelming community support in their five years together. They have received grants from The City of West Hollywood (2005), The American Composers Forum (2001, 2003), and The California Council For Humanities (2001) for their work as composers, performers, lecturers, and workshop leaders. The Yuval Ron Ensemble has also been honored with receiving The Los Angeles Treasures Award (2004). The Ensemble has been invited to perform and lecture at many festivals, colleges, and music venues across the United States. In 2002 The Yuval Ron Ensemble was featured at The World Festival of Sacred Music in Los Angeles. This year The Yuval Ron Ensemble will be in residency at Brandies University in Boston, as well as being the first American-Middle Eastern Ensemble to perform at an International Peace Festival in Korea. In 2003 the Yuval Ron Ensemble released their first album 'Under The Olive Tree' on Magda Records. Under the Olive Tree is an International favorite with world music lovers and has been featured on National Public Radio's 'Echoes' and 'Hearts of Space' programs.

Here's what you say about
Yuval Ron - Tree of Life.