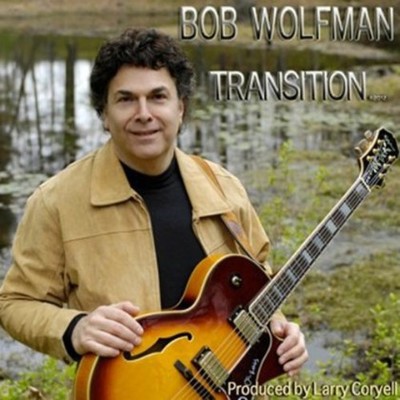 BOB WOLFMAN featuring LARRY CORYELL and "TRANSITION" ©2012 *******The New SUPERGROUP for the New Millenium******** A band of legendary talents come together to perform music from BOB WOLFMAN'S brand new album/CD "TRANSITION". Produced by Larry Coryell, the "Godfather" of Jazz/Rock fusion, this new CD offering from Bob Wolfman reflects his influences from 60's Jazz standards, Classic Blues from the 70's and FUSION from the 70's to the present. With music and lyrics composed by Bob Wolfman, Larry Coryell and Victor Bailey along with some classics, "TRANSITION" is possibly one of the most important new album releases this year. Bob Wolfman delivers stellar vocal performances in various styles and registers, and of course lots of burnin' jazz/blues/rock fusion guitar work and solos he's famous for. Larry contributes his wizardly guitar soloing and innovative comping style to all tracks. Regarding the level of musicianship, talent and overall experience, to quote Larry Coryell, "Ten million dollars couldn't buy a better rhythm section!" The CD features world class giants; Victor Bailey (Bass), Kenwood Dennard (Drums), and Ferdi Argenti (Piano) BOB WOLFMAN - Born and raised in New York City, the life of a struggling musician in the urban grit or the early seventies surely helped to put the 'soul' in his sound - having played with legends like Joe Beck, Chick Corea, Grover Washington Jr., and his lifelong mentor, teacher and friend Larry Coryell didn't hurt either. Bob became Larry's protégé and they formed a deep unbreakable bond that has lasted more than four decades. Bob started doing studio work in Manhattan when he was just in his mid teens, and has played and/or recorded with every type of band imaginable. After touring for a few years Bob came to Boston and graduated from Berklee College of Music and he shortly opened his famed Wolfman's School of Music thereafter. To the delight of his fans Bob is now becoming much more active as a touring performer/recording artist again. LARRY CORYELL - Truly one of the greatest of all the Jazz guitar giants ever, Larry Coryell deserves a special place in the history books. The pioneer/"Godfather" of Jazz/Rock fusion music, he brought what amounted to a nearly alien sensibility to jazz electric guitar playing in the 1960s. With a hard-edged, cutting tone, phrasing and note-bending that owed as much to blues, rock and even country as it did to earlier, smoother bop influences. Yet as a true eclectic, armed with a brilliant technique, he is comfortable in almost every style, covering almost every base from the most decibel-heavy, distortion-laden electric work to the most delicate, soothing, intricate lines on acoustic guitar. VICTOR BAILEY - has been hailed as one of the worlds greatest bass guitarists since the late seventies while he was still a teenager. He gained international recognition in the early nineteen eighties when he joined the innovative jazz fusion supergroup Weather Report. He has made three of the most highly acclaimed solo records ever by any bassist. As a studio musician he has played on over one thousand records. He has toured and recorded with artists as diverse as Joe Zawinul, Mike Brecker, Mary J. Blige and Madonna. He is also a prolific composer, producer and bandleader. He is currently working as a solo artist and with CBW with Larry Coryell and Lenny White. KENWOOD DENNARD - "Woody", as he is affectionately known, is one of the world's top performing and recording drummers. The list of giants he's worked with is far too long to list and reads like an encyclopedia of music icons in Jazz, Funk, Rock, Blues, Pop, and Soul; Greg Allman, Chet Atkins, Ray Barretto, George Benson, Art Blakey, Hiram Bullock, George Clinton (P-Funk), Chick Corea, Larry Coryell, Miles Davis, Gil Evans, Dizzy Gillespie, Herbie Hancock, Whitney Houston, Quincy Jones, Stanley Jordan, Hubert Laws, Manhattan Transfer, Pat Martino, Dave Matthews, Bobby McFerrin, John McLaughlin, Marcus Miller, Charles Mingus, Maceo Parker/JBHorns, JacoPastorius, Wayne Shorter, Jimmy Smith, Mike Stern, STING, Luther Vandross, Grover Washington, Jr., Edgar Winter, Joe Zawinul. FERDI ARGENTI - Truly one of the finest and most versatile keyboardists you'll ever hear anywhere, Ferdi began his career performing throughout most of Europe as a pianist, keyboardist, vocalist, composer and arranger. His skills rapidly gained recognition, as he played with many of the finest Italian and American musicians, most notably Chet Baker, Lee Konitz, Kenny Wheeler and the Artie Shaw band. Ferdinando's brilliant jazz piano sound and improvisational style are a composite of Charlie Parker's be-bop, Oscar Peterson's blend of bop and swing, the lyrical approach of Bill Evans and some of the harmonic innovations and rhythmic feel of Herbie Hancock and Chick Corea.? To those of us fortunate enough to have experienced Argenti in action, he has found his own definitive style, which is consistently innovative, soulful and "in the pocket". ?He has run the gamut of gigs as a solo artist, tasteful accompanist, and active member of many small groups and big bands.

Here's what you say about
Bob Wolfman - Transition.