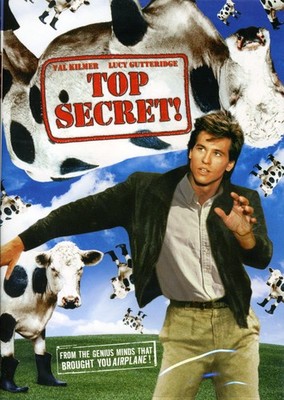 The second of Zucker-Abraham-Zucker's theatrical-feature spoofs (Airplane was the first, discounting the patchwork Kentucky Fried Movie), Top Secret! Lampoons practically every film genre. Specifically, however, this is a hybrid of an "Elvis" movie and a World War II "underground resistance" thriller. In his film debut, Val Kilmer plays Nick Rivers, a Presley-like American rock idol sent behind the Iron Curtain on a goodwill tour. Before long, he is involved in a complex espionage scheme thanks to beautiful Lucy Gutteridge, the daughter of a scientist (Michael Gough) held captive by the Communists. Also essential to the action is flamboyant resistance leader Christopher Villiers, who behaves like Victor Mature in Betrayed (1954) and talks like James Mason. Adhering to Z-A-Z's cheerful disregard for people, places and events, the East Germans are depicted as Nazis, while the Underground is comprised of Frenchmen. The plot is mainly an excuse for the Z-A-Z team's fondness for joke-a-minute lampoonery, skewering cinematic targets ranging from the Blue Lagoon (1980) to the Wizard of Oz (1939). As in Z-A-Z's other efforts, Top Secret! Scores it's biggest yocks when invoking clichés that we never realized were clichés-and falls on it's face whenever attempting a too-obvious gag (the biggest clinker: that pigeon statue in the park). Everyone has his or her favorite bits in this film: our faves include the resistance fighter named Deja Vu ("Haven't we met somewhere before?"), Kilmer's horrible nightmare while being tortured (he arrives too late to take final exams), the army-booted cow, the sensitive Pinto, and the East German National Anthem, sung to the tune of the Shorewood (Wisconsin) High School marching song. But let's say no more: comedy of this nature is designed to be seen, not written or read about.