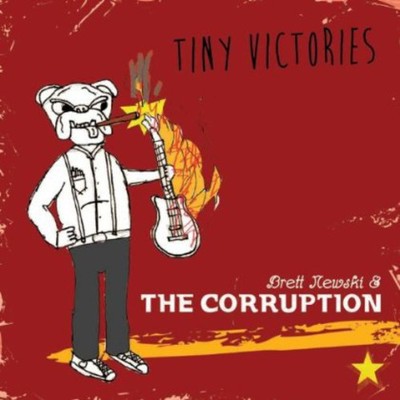 Brett Newski -Vocals/Guitar/Keys Jeff Gantner- Bass/Vocals Matt Green- Drums/Keys/Vocals Teaming up in the steaming city of Saigon, Vietnam, the multi-national members of Brett Newski and the Corruption have recently been making inroads into the South East Asian indie scene.The band has been featured on MTV Asia, Hard Rock Cafe Live, and high profile South East Asian festivals after tours in the USA and South Africa in 2012. With a penchant for catchy tunes, sharp turns of phrase and stripped down arrangements, BNATC are ready to attract a wider audience. The band are about to embark on an extensive tour of the United States in support of their new full-length record, 'Tiny Victories'. "In an era where music is being dominated by auto-tune and obsession over looking for the next big thing, the importance on the survival of true rock music is that there are bands still willing to carry the torch. Brett Newski and the Corruption are just that type of band to pin our hopes on."- Rich Turiel, GBV.com, Guided by Voices "The band has a pleasing, accessible dynamic with appealing harmony work and some truly hook-laden melodies." - Jan Michael Sherman, Director of Publicity, MCA Records (Ret.) 'If The Strokes had kept their musical imagination and sharp eye for lyrical detail, they may have become Brett Newski & The Corruption.' - London Calling Radio "There is one band in particular that have graced the stages of HARD ROCK CAFE that take the crowd by storm. Brett Newski & the Corruption never disappoint and never let up. - Chris Puchalski, Entertainment Director, Hard Rock Cafe "An album that's gonna be the soundtrack to many a drive with tracks that will find a home on almost every mix CD and playlist I make. It's heartfelt with catchy hooks and endearing lyrical gems." - DurbanIsYours.com (South Africa) "Love the stripped-down sound, no electronic shenaniganry. Instrumentation that gives hints of The Hives, The Strokes, and The Black Keys. Overall a strong album." - ASIALIFE Magazine "A well-crafted album you can listen to from beginning to end. Looking forward to hearing more from them." - KindAssault Records, Philippines.

Here's what you say about
Brett Newski & the Corruption - Tiny Victories.