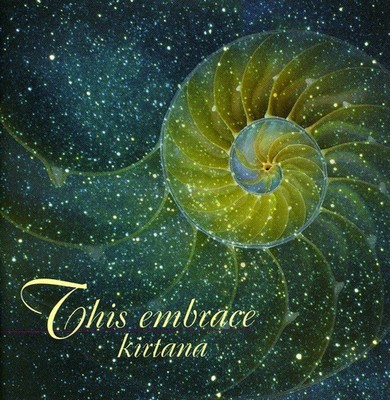 New Age Vocal. Contemporary sacred songs celebrating divine love and the truth of who we are. REVIEWS: 'A brilliant poet, marvelous songwriter, and lovely guitarist, Kirtana's albums have become more magical with each release. I've called her a Rumi of our time, and if you give yourself a chance to listen carefully to This Embrace, I'm confident you'll see why. Guest artists joining her on this transcendent album include Alex de Grassi (guitar), Spencer Brewer (piano), Matt Eakle of The David Grisman Quintet (flute) and Dennis Murphy of Acoustic Alchemy (bass). A most special guest is Gangaji, an awakened soul who offers satsang around the world. For lovers of New Age vocal music, it doesn't get any better than 'This Embrace.' -- Steve Ryals, New Age Retailer 'Kirtana is an artist of many mediums; her angelic voice and brilliant musical compositions are matched by her gifts as both poet and songwriter. Her ability to bring together other talented musicians to support her musical skills is also laudable: Hilary Stagg on harp, Alex de Grassi on guitar, and Spencer Brewer on piano, are but a few who join her on 'This Embrace.' Yet perhaps Kirtana's most impressive feat is her ability to weave these diverse elements and talents together while remaining true to the spiritual core of the album. Kirtana's lyrics speak of spirituality, from the light and playful to the sublime, with delicate passion. Her voice, as it plays with the instruments, is never demanding but always an inviting focal point in every song. The sincerity of 'This Embrace' is further enhanced through vocals by Gangaji, a well-known spiritual teacher. For those seeking spiritual fulfillment, 'This Embrace' is not to be missed.' -- Bette Timm, NAPRA Biography of Kirtana (pronounced Keer-tahna, from the Sanskrit root: kirtan, meaning 'that which is worthy of uttering') Born in a small coastal town in Maine, Kirtana received her first guitar at the age of eleven as a Christmas present. It was a Sears Silver Tone. After a few months of struggle and calluses to her fingers, her sympathetic parents replaced it with a small Spanish classical guitar. And thus Kirtana's sparse, mostly self-taught, classically-influenced guitar style emerged.. For many years, most of her musical performances took place in her bedroom to an audience of one, as she had no aspiration to use music to entertain but was content with the self-expression and catharsis that songwriting and poetry offered. As a teenager, Kirtana was drawn to reading the books of such spiritual masters as: Yogananda, Ram Dass, Alan Watts etc. She was initiated into Transcendental Meditation at the age of 17 and by twenty-two was teaching meditation in Maine. After teaching for a year and a half she decided to finish her formal education, begun a few years before at the University of Maine at Orono. She graduated three years later from Maharishi International University in Fairfield, IA (The TM College), with a BA in Literature. In the early eighties, she moved to California where she has lived ever since, drawing constant nourishment and inspiration from the beauty and energy of the central coast. After a few years in Big Sur, Kirtana was moved to record some of the songs she had been quietly amassing over the years. Her debut album, Healing Rain, issued on her own label, was the result: a collection of ten songs centered around the theme of personal healing and transformation. Once the CDs and tapes arrived, she knew she would have to start singing publicly or they would just take up space in her closet. Her early gigs were at folk venues, first opening for others (David Maloney, Ramblin Jack Elliot, etc.) and then offering concerts of her own. Even though she met with some success in her attempts to fit in with the New-Folk circuit (She was a finalist at the Kerrville Folk Festival in 1991, a winner at the Napa Valley Folk Festival in 1992 and a showcasing artist at the 1995 North by Northwest.), her spiritually infused lyrics and odd-sounding name left her feeling somewhat out of place. Still, encouraged by the sales of her first CD and by some mysterious artistic compulsion, she produced a second CD three years later, called Parrish Light. And gradually she moved away from traditional folk venues and turned toward New Thought Churches and gatherings of a more spiritual nature. By the time she released her third CD The Offering; Epiphanies and Prayer Flags in 1997, her attention was less on some of the personal concerns addressed in earlier songs and more on her relationship with the Cosmos. Just before The Offering went to press, she met her beloved teacher, Gangaji, Her most recent CD, This Embrace is comprised of eleven songs sparked by the love and self-recognition of that encounter. In addition to these four albums, Kirtana's songs have appeared on several compilations over the years, including 'Streams of Light', ( A Healing Hearts Production)and 'We are Each Other's Angels' (on 1-800 Prime CD). Long accused of being too metaphysical for folk and too folk for new age, no currently available category seems exactly right. Until a genre such as 'Music for Awakening' or 'Contemporary Sacred' or 'New Consciousness' is adopted, Kirtana's music will continue to be filed on radio station shelves under the various existing genres: Women's Music, Acoustic, New Folk and New Age Vocal. In Kirtana's own words the best description for both her music and her purpose in sharing it is to 'celebrate divine love and the truth of who we are.'

Here's what you say about
Kirtana - This Embrace.