Bukshot - They Still Don't Love Me 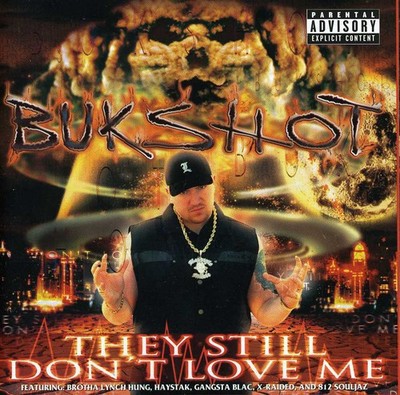 Bukshot is one of the most well known, independent hip-hop artists to ever come from the state of Kentucky. Born and raised in Louisville, Bukshot and his label, Mobstyle Music, have been one of the major forces in the underground music scene for years and he is considered one of the pioneers in Louisville hip-hop. Since his career started in 1997, Bukshot has dropped 5 studio albums, several various mixtapes and compilations, and combined, he has sold over 100,000 units. He has recorded songs with many other big name artists including Tech N9ne, Krizz Kaliko, Brotha Lynch Hung, Nappy Roots, Haystak, Kevin Richardson, Bubba Sparxxx, Jazze Pha, Static Major, T-Bo, Killa C, and Spice 1, and he has been on tour and opened up for many hip-hop artists including Lil Wayne, TI, Tech N9ne, Paul Wall, Master P and The 504 Boyz, Lil Jon and The Eastside Boys, Bubba Sparxxx, Nappy Roots, Haystak, and Bonecrusher. His music includes a broad variety of hardcore, real life stories, and even club banging tracks as well as a big variety of solid producers who implement live instruments in their production. Bukshot, who was just recently released from Federal prison in November 2010, has merged his label, Mobstyle Music, with Interstate Records, which is owned by his long time friend / business partner KC Hustle. They are currently promoting his newest album, "The Problem", which he finished recording right before he started doing his prison time. Bukshot is currently back in the studio to finish his next release, "Weirdo", as well as his long and much awaited album "Hero", which were both entirely produced by Michael "Seven" Summers, who has produced tracks for Tech N9ne, Lil' Wayne, T-Pain, Wiz Khalifa, Ice Cube, and E-40. Weirdo also features other hip-hop artists including Tech N9ne, Krizz Kaliko, Haystak, Jellyroll, Young Bleed, XV, Vito Banga of Nappy Roots, Killa C & Stevie Stone to name a few. Both of these projects will be releasing in 2012 on Mobstyle Music / Interstate Records.

Here's what you say about
Bukshot - They Still Don't Love Me.