The Wizard of Gore / The Gore Gore Girls 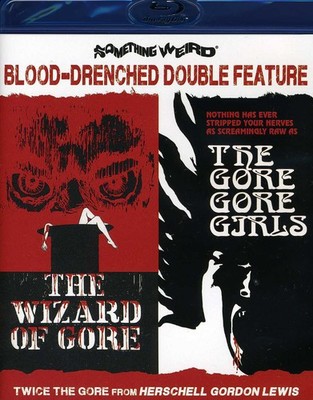 THE WIZARD OF GORE (1970, Unrated, 95 Mins.): Is it magic? Or wholesale slaughter? Montag the Magnificent (Ray Sager), THE WIZARD OF GORE, is a seedy small time magician with a shocking stage act. Hypnotizing pretty young women from the audience to be his obedient volunteers, Montag then proceeds to mutilate them in a series of Grand Guignol illusions. A woman is cut in half with a chainsaw, another is drilled through the stomach with a giant punch press, a metal spike is driven through one gal's head, and two ladies are forced to swallow swords. Trouble is, after the show, the "illusions" become all too horribly real. Blood, guts, and offbeat surrealism in another crackpot classic from "The Wizard of Gore" himself, director Herschell Gordon Lewis. THE GORE GORE GIRLS (1972, Unrated, 81 Minutes): The screwiest, sexiest, goriest one yet! a lunatic with a grudge against G-strings, pasties, and pretty women is slaughtering the sexy strippers who work for night club impresario Marzdone Mobilie (Henny Youngman. Yes, the Henny Youngman). Not content with mere murder, the psycho enthusiastically mangles and mutilates the women, thus turning Marzdone's Go Go girls into THE GORE GORE GIRLS. Trying to solve the gruesome goings on which include buttocks bashing, eyeball popping, face ironing, and body boiling in a bowl of French fries are obnoxious private eye Abraham Gentry (Frank Kress) and ditsy reporter Nancy Weston (Amy Farrell). And by coercing Nancy to perform in an amateur strip contest, Abraham offers the killer the perfect bait... a wicked mix of sick comedy, topless dancing, and ultra violence makes the final film from director Herschell Gordon Lewis (Blood Feast) one of the ultimate B-movie gross outs of all time!

Here's what you say about
The Wizard of Gore / The Gore Gore Girls.