The Who: Tommy and Quadrophenia Live With Special Guests 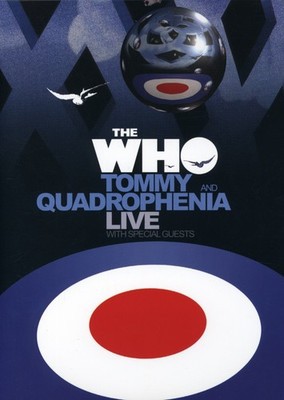 3 disc set, first time on DVD. The Who play their Rock Opera masterpieces live with special guests Phil Collins, Billy Idol, Elton John, Patti LaBelle, Steve Winwood, and PJ Proby. Plus their greatest hits live including 'I Can't Explain', 'Who Are You?', 'I Can See for Miles', 'Won't Get Fooled Again', and 'Baba O' Riley'. More than 4 hours of music + 3 hours of extras. Dolby Digital 5.1 Surround Sound. Disc 1 features a live rendition of their full-blown rock opera about a deaf, dumb, and blind boy. TOMMY was performed live in 1989 at the Universal Amphitheatre in Los Angeles. Disc 2 contains the band's second rock opus, Quadrophenia, from the 1996/1997 U.S. Tour and was the first time it was performed as Townshend and Daltrey had visualized it, with live action and featuring a then-unknown Alex Langdon in a spellbinding performance as Jimmy, the disillusioned Mod. The extras include brand-new extensive interviews with Daltrey and Townshend commenting on and interpreting these shows as they are performed. These MX Interactive Commentaries actually allow you to call Roger and Pete up on the screen whenever you wish, without having to stop the show. Other bonus features include MX designed menus, featuring souvenirs and photos of the shows, the Story of Quadrophenia as told by Aubrey Powell, an extensive show photo gallery, and a new interview with Billy Idol. To top this off the DVD set includes a third disc full of live hits running for nearly two hours making this one of the most important music releases to date.

Here's what you say about
The Who: Tommy and Quadrophenia Live With Special Guests.