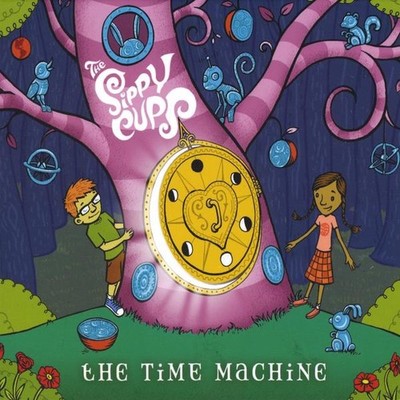 When San Francisco's 'kindie-rock'sensation The Sippy Cups began writing the songs that would become their third full-length CD, THE TIME MACHINE, they noticed that they all seemed to be about growing up and changing. Even the music was becoming a bit more sophisticated and edgy. It became apparent to them that both their own children, and their audience, had grown up some since their last album, and the themes of these new songs subconsciously reflected that process. Their older fans could grow with the music, even as they greeted a new audience of the pre-schoolers the band has always played for. As the songs took shape, the overriding concept that became the album's title also began to take shape. After all, what kid doesn't love the idea of a time machine? But in the case of The Sippy Cups, the time machine they are referring to is not some tricked-out Delorean, but our own bodies, which are constantly growing and changing and moving us through time. They wanted to convey to children and parents how magical that journey through time can be, and how precious the milestones are along the way. The Sippy Cups were formed at a 2004 community fundraiser, just three musical dads playing kid-friendly takes on Nirvana and Syd Barrett tunes. Five years later, they've performed their sophisticated (and cool-parent-approved) kids' music at major concert halls and rock festivals, including the Austin City Limits Festival and Lollapalooza. The Sippy Cups have scored top-ten satellite radio hits and received accolades from Time, Newsweek, the New York Post, Billboard, Wired, the Los Angeles Times and the Washington Post. In 2007, with 'Alternadad' author Neal Pollack, they appeared in a feature on ABC's 'Nightline.' And later that year, the band released their first-ever live concert DVD documenting their colorful, dynamic stage show: 'Electric Storyland: Live at the Great American Music Hall.' The 13-track album is The Sippy Cups' second collection of original songs, following 2006's Electric Storyland. THE TIME MACHINE was produced by Rudy Trubitt with The Sippy Cups, recorded by JJ Wiesler (Kelly Willis, Chuck Prophet, Jonathan Richman) at Decibelle in San Francisco. See below for a track listing. The current Sippy Cups lineup includes singer/keyboardist PAUL GODWIN, singer/keyboardist ALISON FAITH LEVY (Loud Family), singer/guitarist RUDY TRUBITT (The Squids), drummer JOZEF BECKER (Thin White Rope, The Loud Family), bassist ARIANE CAP and juggler/unicyclist/all-around character DOUG NOLAN.

Here's what you say about
The Sippy Cups - Time Machine.