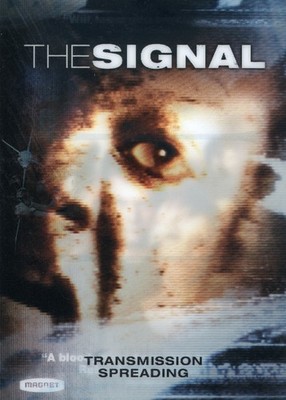 Much like 28 DAYS LATER, THE SIGNAL is a zombie film in disguise asking the question, "What would you do if everyone suddenly turned psychotic?" Conceived by Atlanta filmmakers Jacob Gentry, Dan Bush, and David Bruckner as an exercise in which each would write and direct one of three acts, the result is an experimental and apocalyptic horror tale with a for-fans-by-fans mentality that is cerebral and visceral, both disturbing and thought-provoking. In the first segment, it is New Year's Eve in the city of Terminus, and Mya (Anessa Ramsey) has just begun an extramarital affair with Ben (Justin Welborn). As she leaves his apartment, he turns on the television to witness a noisy and colorful swirl. The mysterious transmission affects all television, radio, and cell phone signals, causing normal citizens to transform into bloodthirsty killers. Director David Bruckner, Jacob Gentry, Dan Bush Star Cheri Christian, Anessa Ramsey, AJ Bowen, Matt Stanton, Suehyla El-Attar, Justin Welborn, Sahr Special Features: Anamorphic Widescreen - 1.78 Audio: Dolby Digital 5.1 - English Subtitles - Spanish - Optional Closed Captioned Additional Release Material: Additional Footage - Deleted Scenes Alternate Scenes - Alternate Beginning Audio Commentary Behind the Scenes Additional Product: Limited Edition - Limited Edition O-Card Lenticular Artwork for DVD Sell-Thru Packaging Runtime: 103 minutes.

Here's what you say about
The Signal.