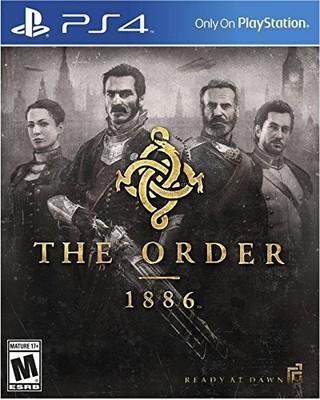 The Order: 1886 is a deep, story-driven single-player experience that introduces players to a unique alternate history and a dark vision of a 19th century Victorian-Era London. It is the dawn of a new age, an age of scientific marvels, but underneath the dense London fog, in the shadows of the Industrial Revolution, enemies both old and new threaten to throw the city and the world into chaos. Watching over the city are humanity's only protectors, an elite band of Knights known as The Order, and the outcome. Where History and Myth Collide Set in a rich, detailed world that fuses real historical figures and events with new fictions and twists on familiar myths and legends, The Order: 1886 presents a unique vision of Victorian-Era London never seen before. Centuries of Conflict In this alternate history, a dangerous foe known as Half-breeds emerged centuries ago. In response to this new threat, an elite order of Knights formed to protect humanity from this deadly threat. Strengthened by a mysterious liquid called Blackwater, the Knights of The Order are able to heal their wounds and extend their life spans in order to engage this supernatural foe. It is the year 1886, and through the dawn of the Industrial Revolution, humans have advanced technology to gain an advantage in this war. Now equipped with powerful weapons to aid in their struggle, The Order is starting to turn the tide against the Half-breeds. A New Threat Arises While the Half-breed threat is pushed back into the shadows, a rebellion emerges that threatens an already unstable peace. Tight security measures that amount to a near police state, combined with a widening gap between the rich and the poor, have left the citizens of London angry at those they perceive to be the cause of their woes. The Rebels' ranks are growing, as is their boldness, as they declare an all-out war against The Order and the government oppression it represents. Danger Around Every Corner Assume the role of Galahad, and engage both Half-breed and rebel as one of the most experienced Knights of The Order. Armed with a deadly array of advanced weaponry, utilize the third-person view and expansive cover system to float in and out of cover as you hunt your enemies. The Right Tool for The Right Situation Fire bolts of electricity to take out long-range targets with the Arc Gun, or rain down fire on enemies with the Thermite Rifle by dousing them in a cloud of flammable dust and igniting it with a superheated flare. The weapons of The Order: 1886 are all based on plausible science and technology. Ahead of Their Time Advances in technology have also helped The Order patrol the city and keep it's citizens safe. Airships patrol the skies and are a constant reminder of the police state that controls Londoner's lives. Every member of The Order wears a wireless device to communicate with each other and the airships that patrol the skies. A variety of gadgets aid them in the work, such as the monocular that allows the Knights to see across great distances, signal airships via Morse code and more. Filmic Vision Immerse yourself in the gritty world of The Order: 1886 through the stunning, cinematic presentation made possible with realistic lighting and rendering techniques and a visual presentation that mimics the nuances and imperfections of actual motion picture cameras and lenses. The dirt on the camera lens, the dust in the air and the light passing through broken and boarded-up windows all make for a more realistic and believable presentation. Rich Storytelling The cinematic experience is furthered by the deep, sophisticated narrative, featuring full performance capture for characters and scenes. Seamless transitions between action and story sequences work together to bring the rich narrative, rife with conspiracy, intrigue and betrayal to life.