Sligo Rags - Night Before the Morning After 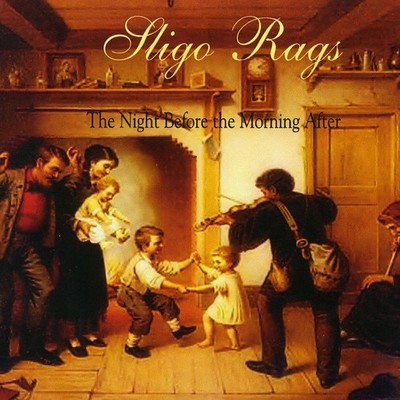 CD Review: Sligo Rags,: The Night Before the Morning After. Some of the finest Irish music is being performed by emigrants and American-born or based Irish-Americans. Apparent case in point: Orange County, California's Sligo rags, a trio with a repertoire that expertly crosses Irish vocal and instrumental music in twinkling fashion, leads traded off between the leader, Michael Kelly (fiddle and vocals), and multi-instrumentalist David Burns (guitar, banjo, mandolin, vocals), with Gordon Rustvold's solid bass guitar providing spot-on rhythm throughout. I say 'apparent,' because the vocals of both Michael Kelly and David Burns sound like pure Irish, but I'm told that in point of fact none of the band is from Ireland at all, tho there is Mother Ireland in the background of two members (not Gordon Rustvold, whose name does provide a bit of a giveaway - but he doesn't sing on the CD). However, in song after song, rich regional - if adopted for the occasion - accents ring clear throughout this very appealing CD, from the opening uptempo version of 'From Clare to Here - it still manages to retain the wistfulness of this lovely song - to the jaunty closer, 'Red is the Rose.' Favorites here: The 'Jackie Tar/Harvest Home/Banish Misfortune' medley (cut 3); the machine-gun delivery of 'Little Beggarman,' which opens cut 6; 'Arthur McBride,' cut 8 - sounding very close to Paul Brady's setting of the song; and the near-swaggering 'Minstrel Boy,' cut 14, with it's emphasis more on the defiance of the bold young harper rather than his untimely death, an interesting re-emphasis. But the music is of high quality throughout, and the CD comes with the fullest recommendation for purchase and repeat listening. (John McLaughlin, April 4, 2005) An Introduction to Sligo Rags' new CD We've all seen a movie, or heard a CD that had been so over-hyped that it could never have lived up to the overstatement. Reviewers continually overuse superlatives until they lose their meaning, altogether. If the writer had simply left well enough alone, you might have actually enjoyed the artist's offering. I hope not to commit this sin with the latest CD from Sligo Rags, 'The Night Before the Morning After,' while giving you a glimpse of what is bound to be a satisfying experience. At first listen, one hears the true sounds of acoustic instruments, save for electric bass, expertly recorded by Martin Beal. The CD has a definite traditional flavor, but also offers some more contemporary titles, and fans of both worlds will be pleased with the songs from the other's genre. The arrangements are interestingly different, and yet sensible. Musical choices are made in favor of artistry, not gimmick or happenstance - sometimes unexpected, but not unwelcome. And the intros, the intros are lush, woven as expertly as an Aran sweater. Immediately evident is the wonderful interplay of Dave Burns (guitars, banjo, mandolin, vocals), and Michael Kelly (fiddle, vocals); although, each player holds his own while soloing. Burns is accomplished on all of the instruments he plays, comfortable with fingerstyle or the pick. His guitar work, my favorite, is clean, blending Irish greens with blues, jazz, and bluegrass. Michael Kelly's fiddle intonation is impeccable, and his tone sweet - no listener's fatigue here. Both Burns and Kelly are able vocalists, choosing songs suited to their respective voices - Burns' the deeper of the two, Kelly approaching an Irish tenor. Gordon Rustvold, anchoring the trio with his steady, crisp style of playing, does electric bass work. While not bombastic, you would notice if he were not there, or if he were too there. The Star of the County Down will have you going for the repeat button. Go ahead, once, but don't fail to go on to the other tracks. The Foggy Dew, Little Beggarman, and John Riley are standout selections of mine. You will have your own. Enjoy. Rob Williams The Fenians.

Here's what you say about
Sligo Rags - Night Before the Morning After.