The Name of the Game Is Kill 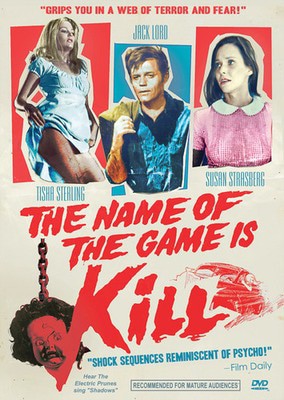 You can't buy a ticket to see this movie... unless you pledge not to reveal the surprise shock ending", exclaimed the promotional campaign for film distributor JOE SOLOMON's 1968 psychological thriller, "THE NAME OF THE GAME IS KILL", from screenwriter, GARY CRUTCHER ("STANLEY"), and television director, GUNNAR HELLSTROM ("GUNSMOKE"). After being lost for over four decades, audiences will at last be able to experience this drive-in suspense film on a special edition DVD, restored for archival film elements and loaded with EXCLUSIVE bonus features. While hitchhiking along a desert highway in rural Arizona, Hungarian refugee and drifter (JACK LORD- "HAWAII 5-0") is given a lift by an attractive young girl (SUSAN STRASBERG-"THE TRIP") to a nearby 'ghost town'. There her family, consisting of her two sisters and their estranged mother, manage an old gas station. One by one, the sisters reveal to him clues to their shattered past. Slowly, the drifter becomes entangled in their web of deceit and desire, leading to "one of the most surprise shock endings ever filmed!" Co-starring COLLIN WILCOX ("TO KILL A MOCKINGBIRD") and TISHA STERLING ("COOGAN'S BLUFF"), this 1960's drive-in thriller will keep you spellbound! Photographed by Academy Award winning cinematographer, VILMOS ZSIGMOND ("CLOSE ENCOUNTERS OF THE THIRD KIND"), and assembled by acclaimed editor, LOU LOMBARDO ("THE WILD BUNCH"), this long lost cult masterpiece contains "shock sequences reminiscent of Hitchcock's 'PSYCHO'". (Film Daily)

Here's what you say about
The Name of the Game Is Kill.