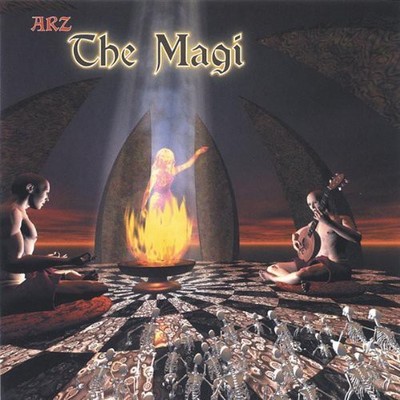 Arz continues the "sonic story" ideal, telling tales of ancient mythos and future worlds in the second release The Magi. The Magi features five tracks that exemplify an array of electric and acoustic guitar textures embracing fresh progressions and chordal voicings. Unlike Serai, Arz's first release, this album is understated in it's approach focusing on bringing the listener to a "state," a mental and spiritual receptivity to the sonic tales. Ur and The Magi are part of an ongoing song cycle that began with "The Strange Experiment of Dr. Trent" a track from Serai. Ur was an ancient Sumerian city home of the Chaldeans and also of Abraham mentioned in the book of Genesis. The Magi were the "priests" of Sumer; practitioners of the divinatory arts and magic. Much in the tradition and length of the symphonic poem (a form popular in the late Nineteenth century) both Ur and The Magi are rich in timbre variation and thematic material, blending elements of rock, metal, and world music. Futureman (6:23) Ambergris and Indigo (4:45) Ur (15:05) The Magi (24:05) Tea with Me (6:19) Reviews "Serai is a modern masterpiece of soaring guitar instrumental music that combines rock, jazz and classical..." --Twentieth Century Guitar Magazine "It rocks, it swings, and sometimes it just lays back and let's the music whisper. For all this though, it is Steve's acoustic guitar playing that impresses most, and the man has style and technique to spare." --Tom Karr, ProgressiveWorld.net "...instrumental neo-prog in the style of YES, GENESIS, RUSH, FOCUS, IQ...Without a doubt the 2 CDs are a pleasure to listen to, with Steve's musicianship reaching a very high level. Any progfan will love this band..." --Gabor Kleinbloesem, Strutter Magazine, The Netherlands "...it twists and turns blending Hackettonian and Fripperian styles to form a soundtrack to a story told only by the music. Powerful stuff indeed! ...Adams manages to keep the listener enthralled and engaged, spinning off on weird tangents...the sheer profundity of musical ideas makes each listen anew..." --Mark Hughes, Dutch Progressive Rock Page "Sure technique and inner fire combine in "Spindlehsank" and on the country-tinged "Stomp," organic showcases for Adam's astonishing finger and fret skills"...."Combined, the two discs make for a bold but inhabitable journey into a fantastic world where the view is often breathtaking." --Lee Williams, Oregonian.

Here's what you say about
Arz - Magi.