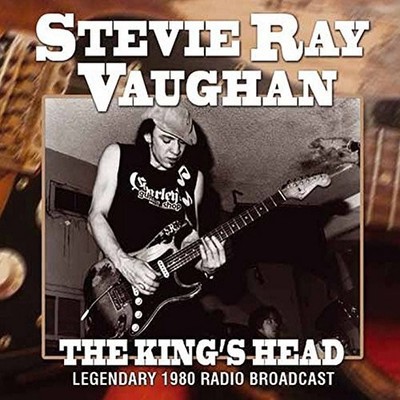 This fabulous radio broadcast comes from the King's Head Inn, a tiny venue popular with students near the Old Dominion University campus, in Norfolk, Virginia, that could accommodate barely 100 people. Luckily, local radio station WNOR was on hand to preserve this storming performance made on July 20th 1980 by soon-to-become-legendary Blues guitarist Stevie Ray Vaughan. It was following a groundbreaking appearance at the 1982 Montreux Jazz Festival that Steve Ray first came to the attention of such major rock stars as David Bowie (with whom he recorded the Let's Dance album), the Rolling Stones and Jackson Browne. He went on to spearhead the 1980's Blues revival and recorded an acclaimed series of albums for Epic Records, beginning with Texas Flood in 1983. Tragically, Stevie's career was cut short when he was killed in a helicopter crash in August 1990. At the time of this performance, however, Stevie had yet to release any records under his own name. What he did have, though, was a rock-solid grounding as a live performer, having formed his first band, the Chantones, fifteen years earlier in Dallas, Texas, at the tender age of 10! Notably, the groups debut gig included a version of Jimmy Reed's blues standard Baby What You Want Me to Do. Up until the late 1970's, in Dallas - and later Austin Stevie Ray honed his chops with a series of local acts including Cast of Thousands, Blackbird, Krackerjack and Marc Benno and the Nightcrawlers. In the later 1970's he appeared on three 7 singles (Other Days, My Song and Blow, Joe, Blow) with popular Austin band, Paul Ray and the Cobras. During occasional absences by Paul, it would be Stevie who stepped up to deputise on vocals and guitar. Soon Stevie decided to quit - Paul took it philosophically, and told him: you re a front man now. You don't need to be in somebody else's band. Soon SRV had formed his own five-piece, Double Trouble (named after the Otis Rush song). By the time of this recording the group had been whittled down to a power trio with Stevie Ray on guitar and vocals, bassist Jackie Newhouse and drummer Chris Layton, who was recruited in September 1978. Although Stevie Ray Vaughan would become a prolific song writer, this evening's set includes just two of his own compositions, I'm Cryin' and Love Struck Baby. Both of these songs would subsequently appear on his first album, Texas Flood which was released in 1983; the latter song was also issued as a single that same year. The other songs in the set are drawn from the catalogues of Stevie's blues heroes. Opening proceedings is a fine version of Freddie King's perennial Hideaway. There are two numbers originally written by Howlin' Wolf (Chester Burnett) - Love Me Darlin' and I m Leaving You (Commit a Crime) - and tipping his Stetson to Jimi Hendrix are versions of the master's own Little Wing and Driving South, a song popularised by Hendrix but actually written by Curtis Knight. Completing a stonking set are Robert Geddins Tin Pan Alley and, of course, Larry Davis and Joseph Wade Scott's 1958 Blues classic, which also provided the title of his debut, Texas Flood.

Here's what you say about
Stevie Ray Vaughan - Kings Head.