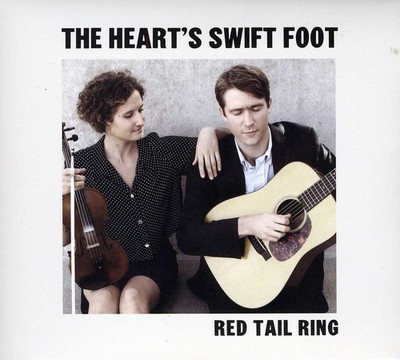 'To hear Red Tail Ring live is transformative. Their melodies are approachable, their lyrics deeply rooted, and their playing is impeccable.' - Jay Lapp, The Steel Wheels 'Pristine harmony from two voices made to go together. Wonderful, authentic sounding instrumental work - a Red Tail Ring concert is pure pleasure!' - Al Kniola, The Back Porch WVPE In their third full-length album released on Earthwork Music, Michael Beauchamp and Laurel Premo present 10 original songs with two acoustic standards that stretch the confines of what two people can create sonically with guitar, banjo, fiddle, mandolin and dobro. The duo's signature style, of layered, intricate instrumental lines over close vocal harmonies, shines on this new collection. "We crafted the recording to be as close to our live performance as possible," Beauchamp says. "We feel we're at our best when we're playing together, listening and reacting as we go along." The album title, "The Heart's Swift Foot," is taken from one of the tracks. Beauchamp says, "There's a thread throughout the album of the heart, and of love, as a wild, unpredictable force." Premo adds, "We write about the heart beyond the scope of romance and explore it's working condition - how it guides the choices you make and how well they serve you." Songs on the album touch on making peace, setting aside troubles, navigating closeness, adapting to change over time. And as in Red Tail Ring's 2011 releases, "Middlewest Chant" and "Mountain Shout," the duo moves seamlessly across genres drawing on folk, old-time and bluegrass sounds. Some songs have shades of older forms, such as the conversational back-and-forth of "Katy Came Breezing," or the banjo-ballad feel of the title track, "The Heart's Swift Foot." In other cuts, "Dirt Triangle" and "Body Like a Bell," traditional structures sidle up next to new musical thoughts. The only two selections not written by Beauchamp and Premo ("St. James Hospital" and "My Heart's Own Love") honor the recent passing of two acoustic luminaries - Doc Watson and Hazel Dickens. The dozen songs were recorded at La Luna Studios in Kalamazoo, Mich. - the town Premo and Beauchamp call home when they're not on the road. In 200 shows since the 2011 releases, Red Tail Ring has traveled to both U.S. coasts and performed in the country of Denmark - "exporting some Midwest sounds," as Premo puts it. Both musicians say that touring and audience response were part of the inspiration for this album. "Our music harkens back to older tunes," Beauchamp says, "and that resonates with audiences. In this album we're continuing a conversation with listeners and inviting them to keep moving with us on this musical path."