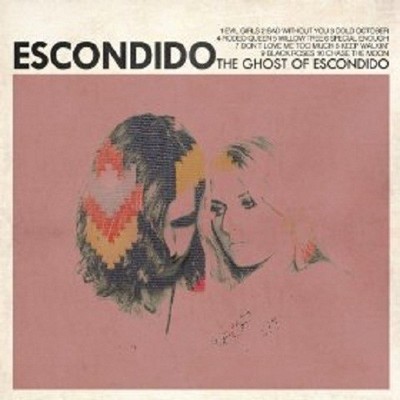 Escondido is Nashville, TN based artists Jessica Maros and Tyler James. Recorded live in a single day, their 10-song debut album was released Feb. 26, 2013. Their sound is a washed out desert landscape steeped in American roots music. We wanted it to be like Clint Eastwood playing pop songs at one of the honky-tonks downtown, James mused. But we've been told it sounds like desert sex. The pair met while James was recording their mutual friend at his home studio. Jess was quietly strumming this song Rodeo Queen on the couch while everyone else was making drinks in the kitchen. I pushed record and added a little groove before folks got back in the room. Later that night we listened to it and both said 'You wanna make a record? They spent the next two months crafting the songs and bonding over a shared love of spaghetti westerns and 70's music. We'd put on Ennio Morricone every morning, says Maros. It's an easy process when you both love the same stuff. The two gathered some musician friends and cut the record on October 18, 2011 at the Casino Studio in Nashville. We wanted to capture that initial instinct, says James. The talent in this town allows you to set up in one room and let 'em do their thing. Musicians Evan Hutchings (drums) and Adam Keafer (bass) give the backbeat to Scotty Murray's washed out western-style electric guitar. Maros' seductive vocals bring to mind Mazzy Star as they float atop James' sparse guitar, trumpet, and keyboard work. Escondido's songs range from the Tom Petty/Fleetwood Mac influenced pop numbers Cold October and Bad Without You, to the lovelorn country ballads Special Enough and Willow Tree. The record was an outlet for me, says Maros. Each song brings back where I was, what I drank when I was writing them. It was a dark time and this album got me through it. The band's heavy sentiment is balanced out by the playful twang of songs like Don't Love Me Too Much and the Keep Walkin'. Music helps US forget the very conflict it grows out of, says James. But my favorite songs embrace that dissonance. The album marks a new chapter for both members. Maros, a Vancouver, British Columbia native, found success as a clothing designer after initially moving to Nashville with a record deal. Her jewelry has been worn by the likes of Prince and Lady Antebellum, her handmade dresses gracing the red carpet at the Oscars and Country Music Awards. James, a small-town Iowa native, has spent the last decade on the road as a solo artist and member of Los Angeles based Edward Sharpe & the Magnetic Zeros. We both wanted a change of pace, says Maros. I wanted to focus on music again and Tyler wanted to spend more time in town making records. The result is the formation of Escondido, a band whose songs are a tale of love lost across the western sky.

Here's what you say about
Escondido - Ghost of Escondido.