Buddy Mondlock - Edge of the World 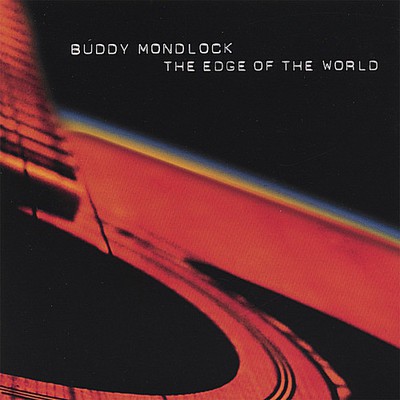 Buddy Mondlock writes songs. He does it so well that some great songwriters have recorded his songs on their own albums. Guy Clark, Nanci Griffith and Janis Ian, to name just a few. But there's nothing like hearing the guy who wrote 'em sing 'em. He's not going to pin your ears back with those songs. He's going to draw you into his world. Where a single snowflake follows the trajectory of a relationship, where you get your pocket picked by a Roman cat, where you might swim over the edge of the world if you're not careful and where dreams that don't come true still count. And it can all be happening in a little folk club or on a stage by a grassy hill or in someone's living room or in the Royal Albert Hall. His new album, "The Edge of the World," is his most personal recording to date. The song cycle is an introspective journey from childhood through to the recent breakup of a marriage and beyond. And while always a wry observer of the social interactions of human beings, the song "Big Fish, Shallow Water" takes on a political edge as well. Buddy did most of the playing and singing himself, with a little help from longtime friend, bassist Mike Lindauer. Then coproducer Jim Tullio added just the right sonic touches of percussion and atmospheric guitar to glue it all together. When Buddy's not on the road you can find him in Nashville but he grew up in Park Forest Illinois, a suburb of Chicago. He didn't have a troubled childhood. His parents were nice to him. They paid for guitar lessons when he was ten and they never said, "when are you going to get a real job?" He sang Crosby, Stills and Nash songs with his sisters and answered his little brother's questions from the top bunk. A few years away at college puzzling over Homer and Plato and then he was back. Living in the big city this time and playing open mics at Chicago's crucible for songwriters in those days, the famed Earl of Old town. He once opened for the amazing Steve Goodman there on New Year's Eve. Buddy was 21. Says he could have walked out of there that night and gotten hit by a bus and he wouldn't have felt like life cheated him at all. When Buddy made his first trip to Texas Guy Clark heard him singing one of his songs under a tree at the Kerrville Folk Festival and liked it. So Guy went back to Nashville, opened the door and said, "listen to this kid, he's good!" A publishing deal and a U-Haul headed south soon followed. People were starting to pay attention. In 1987 he was a New Folk Award Winner at Kerrville and he released his first album called "On the Line". David Wilcox recorded "The Kid" on his first record for A&M. Buddy did some writing with this other new kid in town named Garth Brooks (they had the same manager). Janis Ian heard him singing at the Bluebird Cafe and asked him if he'd like to write with her. Their song "Amsterdam" got recorded by Joan Baez. Nanci Griffith asked Buddy to sing on a show she was taping for Irish television. She ended up liking that song so much that she recorded "Comin' Down In the Rain" on her Grammy Award winning collection "Other Voices, Other Rooms." Garth became a star and "Every Now and Then" ended up on his album "The Chase." Buddy was touring all over the country by this time playing coffeehouses and the occasional festival (he was a regular on the main stage at Kerrville by now). And there were trips to Europe too. Buddy's second album, produced by Steve Addabbo, got picked up by Son Records, a small label in Ireland started by the lads from U2 and he was well received on the island of poets. 1996 was a good year. Peter, Paul and Mary recorded "The Kid" and then asked the kid himself to sing with them on their "Great Performances" TV special. He won a Kerrville Music Award for song of the year that autumn for "The Kid" too. In 1998 he released his third album, "Poetic Justice," and it got picked up by EMI Records in Canada and Ireland and by Proper Music in the UK when British DJ Bob Harris began playing songs from it on BBC radio. Tours with fellow Nashville songwriter Carol Elliott followed to an enthusiastic reception by both sets of fans. It was that same year that Buddy was approached by producer Billy Mann who had a unique project in mind. Buddy colaborated with the legendary Art Garfunkel and the wonderfully musical Maia Sharp. The three of them wrote and recorded an album together called "Everything Waits To Be Noticed," released on Manhattan/EMI in 2002 to critical acclaim.The trio toured all over America and Europe in support, singing together like feathers in a wing. Now Buddy's back with a new solo recording, hitting the road performing and leading songwriting workshops, and of course, writing songs. Cause that's what he does and that's who he is. Lean in and listen, you won't be sorry.

Here's what you say about
Buddy Mondlock - Edge of the World.